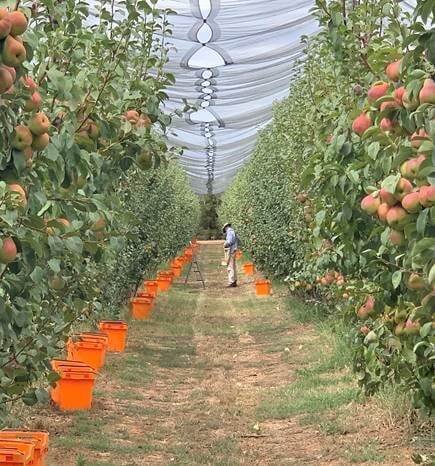 The latest ABARES Insights report into the impacts of climate change on Australian farms has been published on the Department of Agriculture, Water and Environment website.

What does this mean for apples and pears?

While the Insights report concerns broadacre farming, the pressures of drought, extreme heat and reduced winter chill are likely to create challenges for productivity in pome fruit.

What can growers do now?

Adapting to the effects of extreme heat and drier climates will be key to the profitability of orchards. Dr Ian Goodwin has undertaken a variety of research in this area, both at the Agriculture Victoria Tatura SmartFarm and in commercial orchards.

“Historically we did quite a bit of work on adaptation in orchards,” Dr Goodwin said. “What we’re really focusing on is trying to maximise the quality of the fruit. Yield is still important, but our research mainly concerns the impact of climate on fruit quality parameters.”

These projects include studies on netting, evaporative cooling, winter chilling and orchard design. Current studies being conducted in Agriculture Victoria’s ‘Sundial Orchard’ are focussing on row orientation and the impact on water use, yield, colour development and sun damage as part of a PhD project and the PIPS3 Program’s Advancing sustainable and technology-driven apple orchard production systems (AP19003); and a separate new experiment with solar panel placement above orchard rows to shield excessive solar radiation and provide alternative energy sources.

Of these, netting and evaporative cooling are two adaptations growers can start implementing now to offset the effects of drought, higher temperatures and weather variability.

“Netting helps block excessive solar radiation and also creates a microclimate, which can reduce the irrigation requirements,” Dr Goodwin said. “This makes netting an effective practical adaptation for apple and pear orchards in the face of drought and increasing temperatures, as well as reducing the impact of wind and extreme weather events, such as hail.”

A netted apple trial undertaken by the Department of Primary Industries and Regional Development (Agriculture and Food) in WA found that both black and white netting reduced sunburn damage significantly compared to no netting, with little overall difference between the two netting shades. The netting reduced water requirement by approximately 20 per cent more than a non-netted orchard. The study also noted potential adverse effects of shade under netting in the colour development of fruit, which could be offset by modifying orchard practice, including tree management and irrigation.

“One concern is that as soon as you start reducing solar radiation by netting, you also impact colour development in apples and pears,” Dr Goodwin said. “So, we’re trying to come up with innovative ways to reduce the detrimental effect on colour, as well as providing protection from hail and excessive radiation and sunburn damage.

“We are trialling a gable system of netting with clear fibres on the east side – to catch the morning sun – and black netting on the west side – to reduce the more intense solar radiation of afternoon sunlight.

“Because the clear netting allows the morning sun through, the fruit should still have good colour development. The black is reducing the amount of afternoon radiation to prevent sunburn damage and the colour being bleached out.”

While the netting grant funding round has now closed for Victoria, funding applications for netting are currently open in South Australia, Western Australia and Queensland. The details of funding grants for NSW have not yet been announced.