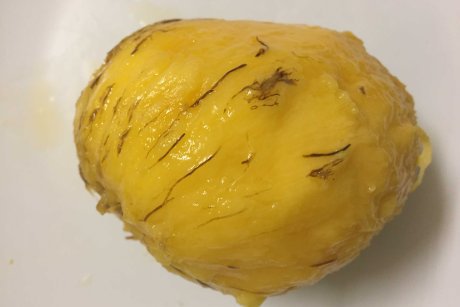 Described for decades as a mystery disorder, resin canal discolouration (RCD) causes bizarre veins to emerge within the mango flesh. Affected mangoes are safe to eat, but the blemishes and discolouration caused by RCD makes the fruit basically unsaleable.

It is now known that RCD is caused by a bacterial infection and can be easily spread. "When we started doing trials we were initially thinking it would be quite difficult to spread," said research leader Dr Cameron McConchie.

"But we ended up doing alcohol washes on our hands, otherwise we'd spread it by just simply touching the surface of the fruit between infected and unaffected mangoes.
"Prior to this research we were in a situation where people were saying RCD was maybe caused by temperature changes or a change in fertiliser.

"But now we know it's a bacteria it makes it much easier for everyone to target what the likely control measures are."

What can mango growers do?
Dr McConchie said the bacteria in question seemed to be widespread, so the key for growers was to find ways of reducing bacterial loads.

"The biggest candidate [for spreading RCD] is the fruit are harvested into a mango wash, and I think that has to be absolutely clean," he said.
"It's pretty much whenever you've got the inoculum and contact with water that you need to be looking … and things like high-pressure hoses which could be spreading aerosols of bacteria we need to be eliminating.

"Also checking packing lines and dips the fruit go through, to make sure they're spick-and-span.

"So I think potentially we've just got to make the whole supply chain — from the harvest right through to the trucks for transport and ripening rooms — they need to be absolutely clean and free from any inoculum."

"Having consumers and retailers have confidence in our product really underpins our ability to promote the product, and to drive consumption and profitability in the industry," he said.

"The work Cameron McConchie and the team has done over the last five years is fantastic and will allow us to [hopefully] remove one of those areas that's been causing some serious lack of confidence [amongst some buyers]."

Mr Gray said RCD had become a big issue for the early part of the national mango harvest, which starts in the Northern Territory.

"But we've seen this [RCD] creeping into some of the supply areas of Queensland as well," he said.
Growers had a series of options they could use to improve hygiene in their operations, Mr Gray said, and this information would be available in future best practice guides for the industry.

The research was funded by the Australian Research Council Industrial Transformation Research Program, Woolworths and the University of Tasmania, with in-kind support from the Northern Territory Government and the Tasmanian Institute of Agriculture.