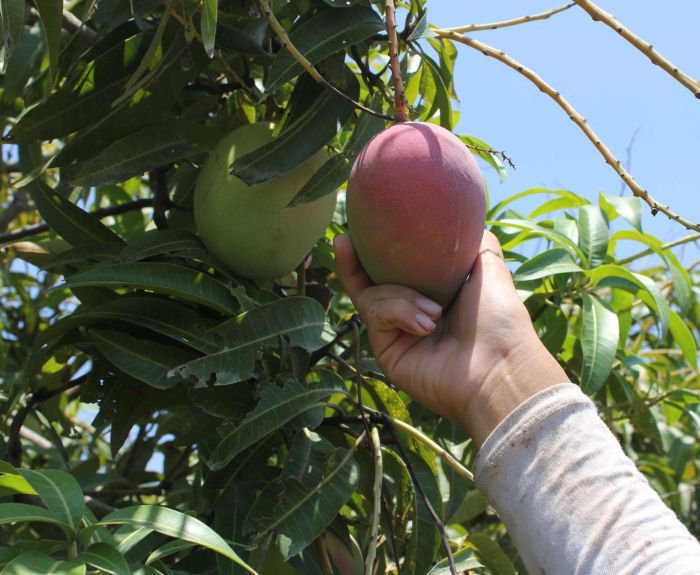 Around 160 seasonal workers from Vanuatu have landed in Darwin, as part of a trial program to fill a labour shortage for the Northern Territory's mango harvest.

The workers arrived on a chartered flight from Port Vila and will spend the next 14 days at a quarantine facility, before heading off to work in various Top End orchards.

The trial has not been cheap, with the NT mango industry forking out the $2,500 quarantine fee for each worker, plus the chartered flight from Port Vila understood to have cost around $100,000, which puts the total bill at around $500,000 before a mango has been picked.

"The touchdown of this plane is a culmination of over four months of tough negotiations and hard work by NT Farmers with eight Commonwealth and Territory Government departments and the Government of Vanuatu," said Paul Burke, CEO of NT Farmers Association.

"It's pretty exciting and this will pave the way for additional flights to come to Australia to help, firstly the mango industry here in the Northern Territory, but Australian [agriculture] more generally.

"We know that New Zealand is looking very closely at this and wanting to start its seasonal worker program as well.

"What we need to do now is make sure this is successful, and we hope to have additional seasonal workers coming in straight-away off the back of this flight."
The group of Ni-Vanuatu are the first seasonal workers allowed into Australia since the nation's hard borders were enforced back in March to stop the spread of COVID-19.

He said the Vanuatu Government had been cautious about the global spread of COVID-19, but was satisfied with Australia's protocols.

"The Australian Government has guaranteed the safety of our workers to Vanuatu's satisfaction, so we're happy to send them off," he said.

"We pray for the safety of our workers going there [to the Northern Territory], we expect them to continue to keep God with them and come back safely."

Vanuatu Opposition MP John Salong, who is a former recruitment agent for seasonal workers, said Vanuatu's Council of Ministers only reached an agreement late on Monday to allow the pilot program to go ahead.

Speaking to the ABC's Pacific Beat program, he said the resumption of the seasonal worker program was great news.

"This group of workers is very important signal in saying that people in Vanuatu intend on going back to work," he said.

"We have been apart of the seasonal work [program] since 2010 and a lot of families in Vanuatu know how much the money that is brought back is important."

The mango harvest has already started around the Darwin region of the Northern Territory.

The current crop forecast for the Darwin region is around 2.8 million trays, with the season expected to start ramping up at the end of September and peak around the middle of October.

Katherine mango grower, Mitchael Curtis has signed up to take around 30 of the seasonal workers from Vanuatu, but said that will not be enough for his 20,000 tree plantation.

Speaking to ABC Rural, he said he has spent months trying to lock in a workforce, and is worried what another COVID-19 border closure would mean to his business.

"After all of this time spent looking after the crop, growing it, irrigating it, spraying it, and then have to worry about whether anyone will be around to pick it, it keeps me awake at night," he said.

"It's been a very hard year, I'm stressed to the max.

NT Farmers Association said it would continue to work with all stakeholders to deliver subsequent flights from Vanuatu, and was continuing its campaign to attract as many local workers as possible.

In 2019 the Northern Territory's mango industry was valued at more than $128 million and was responsible for producing around 52 per cent of Australia's mango crop.