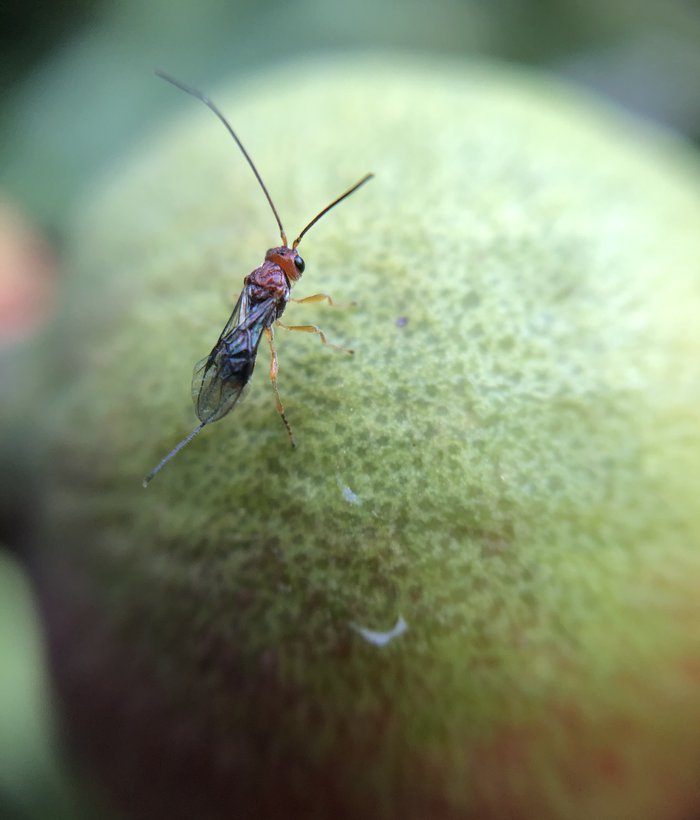 A national research project is underway aiming to develop a biocontrol strategy for managing Queensland fruit fly populations in Australia.

Led by Agriculture Victoria and co-funded by the Department of Agriculture, Water and the Environment, and Hort Innovation, the national project is exploring the potential for different biocontrol strategies, including the use of Australian parasitoid wasps that specifically target Queensland fruit fly eggs and larvae, and the development of biopesticides as alternatives to chemical insecticides.

“At present, most of the tools to manage fruit fly such as bait spraying, mass trapping, and the potential for sterile insect releases, target the adult stage of the fly,” he said. “The beauty of biocontrol is that it targets all stages of the fly – egg, larvae, pupa, and adult, and it is clean, green and sustainable.”

Parasitoids: Our friend and a fruit fly’s enemy

Parasitoid wasps are insect predators that are commonly used as biocontrol agents in agricultural environments. “These tiny insects have an amazing sense of smell that enables them to hunt down their prey — they are the sniffer dogs of the insect world!” Dr Cunningham said.

The two Australian parasitoid species selected for the biocontrol project are highly specific and only attack tephritid fruit flies (the insect family to which Queensland fruit fly belongs). Dr Cunningham said both species already thrive in Queensland and northern New South Wales where they can have significant impact on fruit fly populations when conditions are right, knocking populations down by 40 per cent or more.

Parasitoids of Queensland fruit fly are, however, rare, or absent in the southern states. A major focus of the project is to mass rear these parasitoids for release in Victoria and southern New South Wales. The project is still in its early stages, but the research team has already had some promising results.

Professor Tony Clarke’s fruit fly team at Queensland University of Technology has collected the two species of wasp from the wild and developed methods to culture them in captivity.

The parasitoids have now been transported to the new mass rearing facility at Agriculture Victoria Research’s Tatura SmartFarm, and the first species has been released in towns and orchards in Victoria.

“It was great to watch the female parasitoids get straight to work seeking out fruit fly infested fruits,” he said. “Since then, we have been monitoring the sites to look for signs the parasitoids are surviving. So far, so good — fruit we collected up to eight weeks after release contained parasitised larvae.”

The team began the trial releases in the Goulburn Valley, Shepparton and Mildura, and next season they will continue releases with the aim of getting the parasitoids to establish successfully in Victoria.

“Controlling the fruit flies in urban areas should be of massive benefit to growers. There is a worry that insect populations that build up in the cities are dispersing into orchards and fuelling the spread of the pest,” he said.

“If the parasitoids establish in Victoria, they will help keep Queensland fruit fly populations in check permanently - with perhaps occasional releases to bolster local parasitoid populations. We do not see this as an expensive mass release program, it could be tremendously cost effective if it is successful.”

The biopesticide component of the biocontrol program will look at developing and evaluating formulations of entomopathogenic (insect-killing) nematodes and fungi. This involves isolating these microbes from Australian soil and screening for their effectiveness in laboratory and field bioassays.

The project is funded through DAWE’s Strengthening Australia’s Fruit Fly System Research Program, and Parasitoids for the management of fruit flies in Australia, a multi-industry strategic levy investment under the Hort Innovation Apple and Pear, Citrus, Raspberry and Blackberry, Strawberry, Summerfruit, Table Grape and Vegetable Funds.

To find out more contact Dr Paul Cunningham at paul.cunningham@agriculture.vic.gov.au