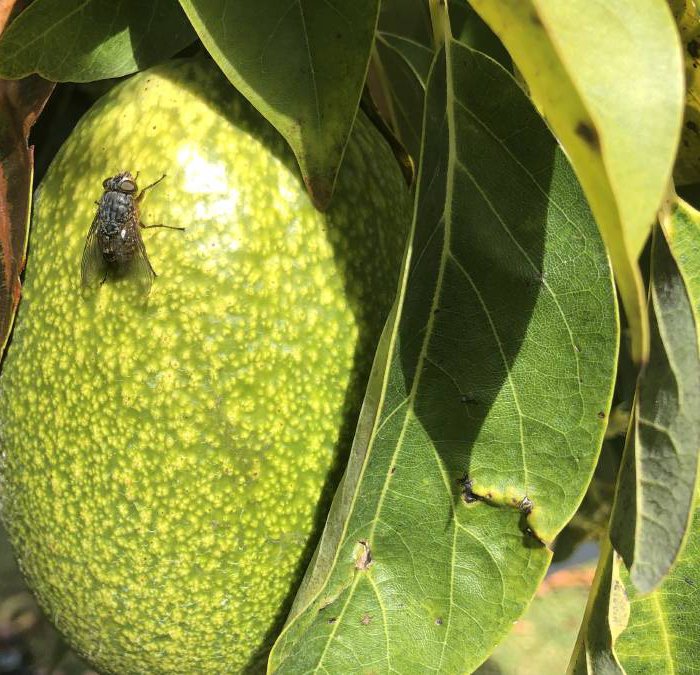 The WA Department of Primary Industries and Regional Development is leading a national research project, funded by Hort Innovation with partners from across Australia.

The third year of trials was expanded in 2020 from an orchard in Busselton to include another new orchard at Pemberton, which all grow the Hass variety of avocados.

Each site hosts three purpose-built enclosures, containing 21 trees each at Busselton and 25 at Pemberton, which has a higher tree density.

On each property, one enclosure was populated with about 5000 western golden-haired flies, one with the western blue-bodied fly and - for the first time - a managed honey bee hive.

Department research scientist David Cook said this year's research sought to verify previous results from the first two years of the trial. Dr Cook said the results showed pollination exclusively by native flies produced yields two thirds of that achieved via open pollinated trees, where flowers could be pollinated by either bees and other insects in the orchard.

"If something were to happen to the bee populations sourced by orchardists, like a new pest or if a disease of bees and hives was introduced into Australia, then at least growers would have a viable other insect species they could use for pollination."

The scientists discovered that native flies in enclosures were particularly useful in pollinating Hass avocado flowers, which open as female one day, then male flowers the next.

"Flies that visit a male flower and pick up pollen while feeding can then transfer the pollen to a female flower nearby," Dr Cook said. "As there are no other sources of sugar available to the flies in the enclosures, they feed on the flowers regularly throughout the day.

"This means there is an increased chance of the male and female flowers being open for pollination, optimising the potential for fruit to be set."

While researchers will not know the results from the trial until the avocados are harvested in June, an examination of fruitlets about two centimetres in diameter or bigger on the trees will provide a good indication of the future yield potential.

"In previous years the fruitlet count of marble-sized fruit in the fly enclosures gave a good indication of future yield, as they did not have a typical fruit drop event that often occurs with trees out in the open," Dr Cook said. "Clearly the native flies were doing a good job of pollinating."

The WA component of the project is also examining the performance of native flies as pollinators in blueberry crops, which has already produced encouraging results from trials at Busselton and the department's South Perth glasshouse.

"In this year's blueberry trials we were looking to verify those results, as well as assess how long the flies remain in the enclosures and examine measures to encourage them to linger in the cropping area, such as protein lures," Dr Cook said.

"The warmer than average winter meant that chilling temperatures below seven degrees centigrade were rarely experienced and the level of flowering was significantly less than normal, producing inconsistent trial results compared with previous years."

Stage two of the project in years four and five will develop rearing techniques for mass production of each species so they can be applied commercially in the horticulture sector.

This work will involve determining the x-ray radiation dose required to render native flies unable to reproduce to ensure there is no increase in the natural population of flies or displacement of other insect species, such as hover flies.