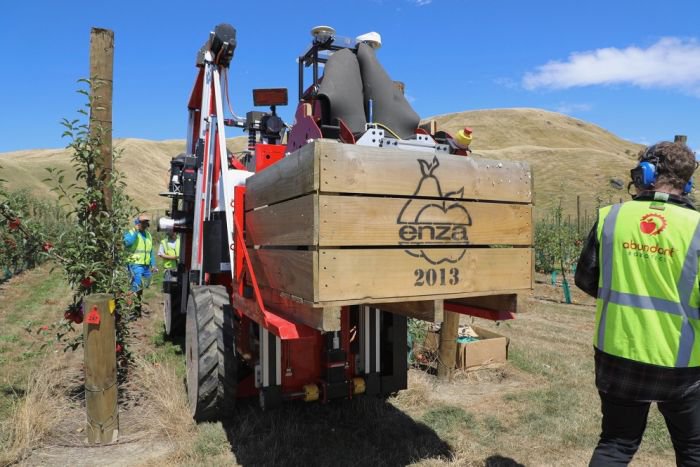 "The robot has computer vision which scans the canopy, identifies fruit suitable for harvest, and uses a sucking method to get the fruit off the tree," said Gary Westwood from T&G Global.

"It's taken some time for the robot to get up to speed but we're happy with the progress so far.

"We've been doing a lot of measuring with this process and there's been no more damage to the fruit than there has with human pickers."

Apple of my robot eye
To utilise the robot, an orchard has to be set up in a certain way to allow the fruit to be easily picked.

A similar prototype robot has been trialled in Australia, at an orchard in Victoria, and Australian fruit growers are watching with keen interest to see how the robot performs.

One of Tasmania's largest apple growers, Howard Hansen, currently employs around 70 pickers and packers at his orchard in Grove in the Huon Valley.

"It's an exciting development, but I still think the project has a way to go and more refinement before it becomes a reality in Tasmanian orchards," Mr Hansen said.

"On the plus side, the robot appears to be gentle on fruit and has the potential to work around the clock compared to people picking the fruit."

Mr Hansen said the robot seemed to work better on flat ground slopes, which he said could create problems on some local orchards.

"We would need to reconfigure many orchards as the robot would not be able to get to some fruit," the Tasmanian grower said.

Robotics adds to capacity
T&G Global said the robot would never totally replace people picking the fruit, but would instead be able to pick extra bins of fruit each day.

"We're looking at the robot picking around 40 bins a day so it will supplement the picking doing by humans," Mr Westwood said.

Currently an operator has to be with the robot when it is working in the orchard, although work is progressing on the robot being able to work alone.

Russel Rankin, a food innovation expert who helps producers take their products from concept to reality, said it was an exciting time to be in robotics and agriculture.

"I'm working with a university in Queensland which is developing a robotic picker for capsicums in protected cropping," Mr Rankin said.

"They are also developing a robot called Agbotwhich can go out into the field and pick weeds.

"Sydney University [also] has a huge investment in developing platforms for the robotic picking of vegetables."

T&G Global said the apples picked by the robot at the Hawkes Bay orchard would make their way to export markets such as Asia.