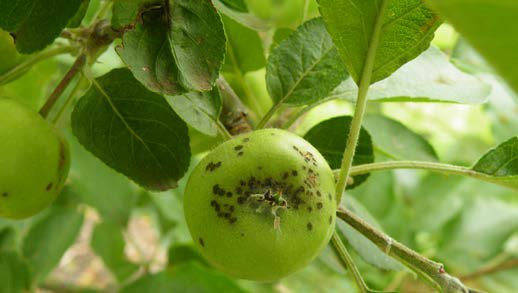 When applied on a regular basis Ecocarb PLUS has been proven to provide control of a range of pathogenic fungi including black spot and powdery mildew in apples and brown rot in nectarines.

The fungicide has also been proven to control powdery mildew in grapes, vegetables, strawberries, roses, apples and rust in ornamentals (geraniums).

“It was shown to be as effective as Penconazole & Metiram at controlling powdery mildew and black spot in apples.

“It is also safe to use in environmentally sensitive areas and within IPDM systems where other fungicides may have the potential to leave undesirable residues on the foliage and harm soil biodiversity.”

Unlike many conventional fungicides Ecocarb PLUS is pollinator compatible, has a zero withholding period and isn’t burdened by re-entry restrictions.

It is also approved for use in Australian Certified Organic crops and has recently received USDA-NOP approval.

Ecocarb PLUS is effective at low temperatures - temperatures where the activity of sulphur sprays is greatly reduced.

Below 15 degrees Celcius sulphur activity is confined to contact activity because vapour activity – which plays the major role in mildew control – is negligible.

Ecocarb PLUS contains a unique combination of two actives - food grade potassium bicarbonate and potassium silicate - which are highly complementary in effect.

Potassium bicarbonate - when in direct contact with fungi - works rapidly as a curative through a combination of osmotic pressure, high pH and the influence of carbonate and bicarbonate ions.

“Firstly, it provides a glass-like mechanical barrier both on the cuticle and within the epidermal tissue of stems and leaves.  This directly protects against fungal infection, hyphal penetration and disease progress.

“Secondly, potassium silicate enhances the resistance of plants to fungal infection, improving their immunity by acting as a signal in inducing systemic chemical defences.”