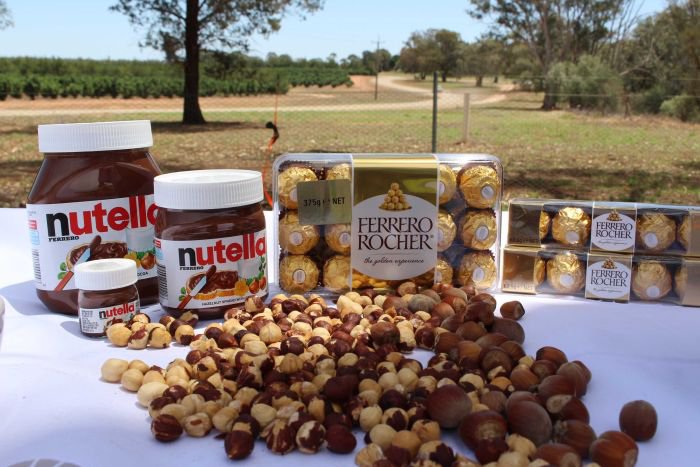 It is hoped the trees will bear 5,000 tonnes of hazelnuts (in shell) by 2020 for use in crowd favourites including Nutella and Ferrero Rocher.

The millionth tree was planted on Wednesday near Narrandera in the Riverina on a property owned by confectionary company Ferrero Australia, which operates under subsidiary Agri Australis to grow the raw material for its products.

The plantings will bolster hazelnut production in Australia significantly, as it is estimated that 170 tonnes are currently grown and industries are reliant on using imported hazelnuts.

The farm was a $70 million investment for the confectionary company, creating 54 jobs.

Agri Australis general manager Claudio Cavallini said once the hazelnuts were harvested, their quality would be assessed,

This would determine if they were used in confectionery products such as Nutella and Ferrero Rocher, ice-cream or for the fresh markets.

The 2,600-hectare property is a demonstration farm for the company, which is using it to trial two varieties of hazelnuts to determine the best performer in the Riverina environment.

All trees were propagated at the on-site nursery and planted across the 1,860 hectares of cultivated land.

The trees are watered via a drip irrigation system supplied from the Murrumbidgee River, which is nestled beside the property, as well as ground water.

Ripe for the picking
Despite it being a dry year, Mr Geurtsen said the trees were thriving and the early planted trees would be harvested soon.

The hazelnuts drop to the ground naturally and are swept into a centre row and picked up mechanically.

For now, until the first crop is harvested, there are no plans to plant more trees.

"We have reached the number we were aiming at and now we have to see how they perform at harvest," Mr Cavallini said.

Eventually the hazelnuts could be made into Nutella at the company's factory at Lithgow, NSW, which employs 100 people.