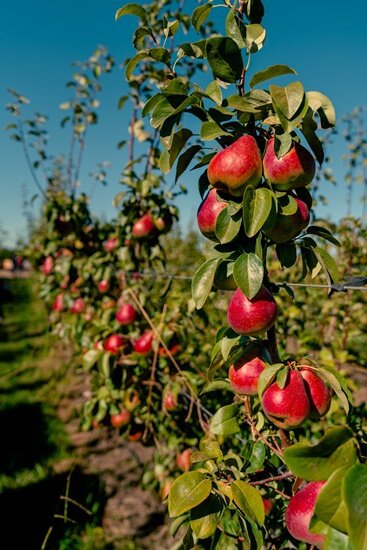 The new blush pear Ricó will be in top shape to show off its colour and quality when it hits Australian retail shelves this winter.

Mild growing conditions across the Goulburn Valley this summer have allowed growers to harvest a productive crop of high-quality fruit this season destined for both existing export markets in Asia and New Zealand, and new domestic market customers.

“The fruit is eating really well, right off the tree,” he said. “The growing season was mild this year which has really helped with the colour and quality.”

This season is the second year of commercial volumes and Mr Carter said quality was improving each year as the trees matured and settled into normal growing cycles.

Andrew Mandemaker, Head of Group Quality, Innovation and Commercialisation at APAL sees encouraging signs for the ANP 0131 variety behind the brand, which was developed by the Victorian Government’s Horticulture Centre of Excellence at Tatura.

“Controlling vigour is really important with these new blush pears and the growers have been able to do that and get the blush colour we need for the Ricó brand.

“With Ricó, we’ve got an exciting, blush variety which tastes sensational and has some real personality. We think it will have a wide appeal to a new generation of pear lovers.”

Ricó branded pears will be in major retail stores in Vic and NSW this winter with the tagline ‘a pear with personality’, giving Australian consumers an opportunity to try the new pear.

“After exporting Ricó for the last couple of years, it’s great news for the brand that we are now able to give customers here in Australia an opportunity to buy it,” said Mr Mandemaker.

“We know that Ricó-branded pears are a big step forward in appearance and taste and I look forward to feedback from Australian consumers.”

Louise Wood, category manager at Freshmax was instrumental in building the brand locally. “Freshmax is excited to be part of the Ricó story and we are really looking forward to the domestic season. It is very pleasing to working towards seeing fruit on shelf here in Australia. It will be great to see the Ricó brand in action in big retail stores.”