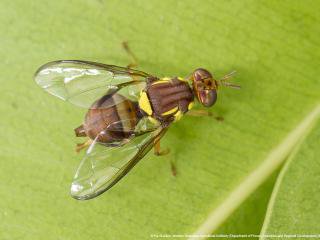 When Fruition was released onto the market in October 2016, it provided a significant advance in managing fruit flies across a range of crops. Fruition was the first – and remains the only product – that targets the egg-laying female fruit fly – the fly that does the damage.

Until that time, programs targeted immature females, immature and mature males, or upset the breeding capability of fruit flies via the release of sterile males, says Agnova business manager Andrew Glover. “While the Fruition trap is simple in design, it represents years of ongoing research by Professor Dick Drew, supported by AgNova Technologies,” Mr Glover said.

While Fruition Nova is highly effective in managing fruit flies, there are advantages to using the traps as an integral part of an overall management program such as protein baiting, removing old fruit and disposing of fallen fruit.

For maximum effectiveness in tree crops, traps should be spaced evenly throughout the orchard at 1.5 to 2.0 metres in height and positioned so that they are obvious to any incoming fruit flies.

Depending on the tree crop architecture, this may mean placement further out on branches – not hidden under the canopy. The trap works by shape, size, colour and smell, so maximising these factors enhances the level of fruit fly control.

Similarly, placing initial traps on the outer orchard rows and then positioning traps moving further into the orchard can be beneficial. Mr Glover said the number of traps is dependent on the attractiveness of the orchard fruit, but also of nearby alternative fruit sources, whether commercial, residential or native – and their effect on population build-up before getting to your orchard.

The effectiveness of Fruition Nova in many cropping situations, even under high fruit fly pressure, has been demonstrated repeatedly. Analysis by Professor Drew showed that 60-70% of fruit flies caught on the traps were egg-laying females – the only segment of the fruit fly population that causes damage to fruit.

“Fruition Nova is a strong research-based tool for monitoring fruit flies coming into your orchard and managing the damage they cause once there,” Mr Glover said.