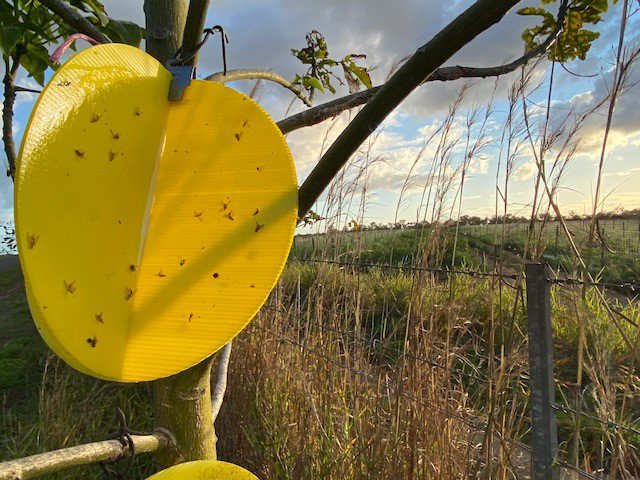 Since the development and adoption of Fruition Nova traps for fruit fly control, there has been widespread success in managing fruit flies across a range of crops, according to AgNova Business Manager, Andrew Glover.

Depending on the susceptibility of the tree crop and the nature of the endemic fruit fly population, this result is further enhanced by the use of protein bait sprays to control the immature flies also coming into the orchard.

In carambolas, a program of traps and baiting saw similar dramatic reductions in losses from fruit fly. Fruition Nova has also been used with success in custard apples, stone fruit, feijoa and mangoes, along with a wide variety of small crops.

In each of these situations, the strategy adopted has been flexible depending upon the susceptibility of the crop, locality, neighbouring crops maturing, and cultural practices used.

For more susceptible crops such as stone fruit, guava and feijoa, where large numbers of flies, both mature and immature, are likely, Mr Glover said the program involving both Fruition Nova traps and weekly Natflav 500 protein bait sprays is recommended.

In crops where the trees are still susceptible but less attractive, an adequate number of Fruition Nova traps throughout the orchard has provided good fruit fly management.

The underpinning discovery from the many trials undertaken by Professor Dick Drew, Griffith University, is that 80% of the flies coming into an orchard are immature and 20% are mature. So, the more of the life cycle that you target, the better the result.

Mr Glover says the Fruition Nova traps provide another advantage, as they show when egg-laying occurs and immature flies are present, providing indicative numbers. This early indication allows the grower to more proactively manage the fly population, as the grower knows from trap catches when the flies are in the orchard, rather than using stung fruit to know they came in 1–2 weeks ago.

Based on this ready-to-hand information, the grower can then decide to either start bait spraying or put out more traps. With more flies, there is also more of that 20% that are not interested in protein and are wanting somewhere to lay eggs.

While the traps are simple in their design and construction, Mr Glover said this belies the amount of research behind them. The shape, size, colour (particular shade of yellow) and lure were developed from extensive testing to find the combination most attractive to fruit flies. So, when fruit flies enter the orchard, they are attracted to the trap or the smell of the protein bait; in the case of immature flies, it is both.

Optimal results are achieved when baiting and trap placement are adapted to match the incoming fruit fly population. In persimmons, excellent results of only 1% crop losses have been achieved without cover sprays and when fruit losses had previously been in the order of 50%.

In custard apples, flies coming from an adjacent crop were all but stopped by the diligent placement of Fruition Nova traps, catching hundreds of flies and resulting in only minimal damage to the custard apples.

Field trials undertaken by Professor Drew in a feijoa orchard with a high fruit fly population, compared various trapping methods with different protein-based traps. In this trial, each trap was placed in one of eleven locations and each week the traps were moved to the neighbouring location so at the end of 11 weeks, each trap had been in each location and each week the flies on or in each trap were counted and maturity determined.

Moving trap locations reduced any location bias within the orchard. At the end of 11 weeks, the Fruition Nova trap with lure caught on average 3.5 times more total fruit flies than the protein traps and more importantly, 21 times more of the mature female flies.

“There have been numerous success stories using Fruition Nova in tree crops,” Mr Glover said. “Success has been enhanced by adopting flexible strategies, depending on fruit fly activity and fruit susceptibility.

“Extensive research by Professor Drew to develop the design of the trap and lure was paired with committed input from AgNova Technologies to commercialise the trap. This research is ongoing to further enhance the only trap on the market that targets the mature egg-laying female fruit fly before crop damage occurs.”