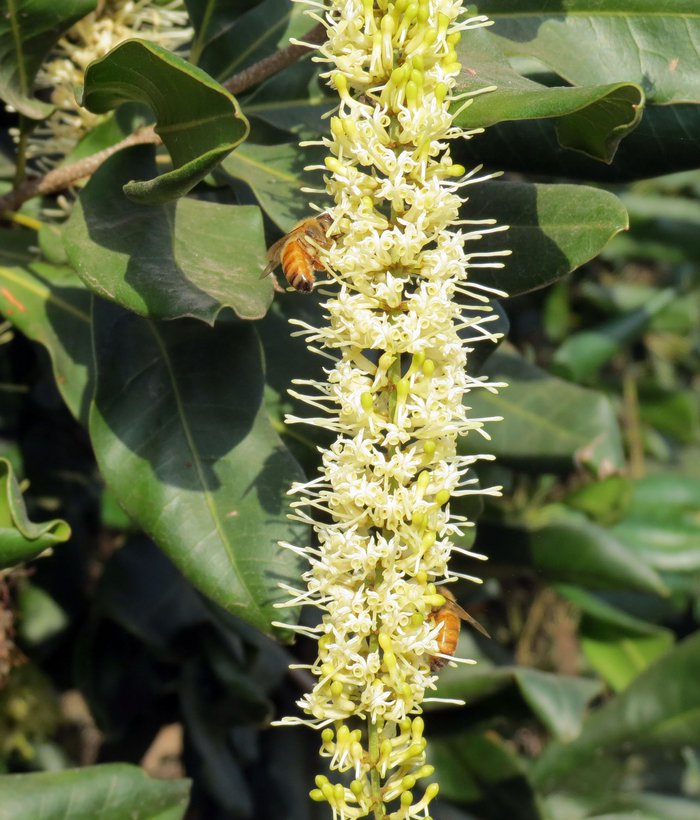 Macadamia nuts are already the nation’s fourth-largest horticultural export. But despite the plant’s evolution in Australia over some 60 million years, it remains susceptible to both endemic and exotic disease pathogens, which challenge commercial production.

To support industry development, the Queensland Alliance for Agriculture and Food Innovation (QAAFI) has been investigating a range of native, emerging and exotic diseases and developing integrated approaches to reduce disease impacts.

Australian Macadamia Society CEO Jolyon Burnett says research from QAAFI has given growers the knowledge and confidence to apply flexible and holistic farm management practices, and to respond to issues as needed rather than following a set ‘recipe’ approach.

Plant pathologist Associate Professor Femi Akinsanmi has led the research for over 10 years and has played a vital role in the ongoing success of Australia’s macadamia industry. Innovation has been a key feature of his approach – for instance, successfully using a mechanical tree shaker to prevent husk spot disease without the need for fungicides.

Husk spot is caused by the pathogen Pseudocercospora macadamiae; it leads to a significant premature nut drop and production losses that have been estimated at $10 million a year.

Researching the disease’s biology and epidemiology, Dr Akinsanmi found that the fungus spreads from old tree husks – the fibrous protector around the macadamia nut’s shell – to new green ones. The pathogen inoculum can persist in old husks for more than two years.

Some divergent thinking led him to a novel management tool – a mechanical tree shaker, which helps to remove all husks from trees, thereby removing sources of potential infection. It has proven so successful it has eliminated the need for fungicide sprays to treat the disease in trials.

“Shaken trees do not carry any husk-spot inoculum into the next season,” he says. “The tree shaker also improves harvesting efficiency by shortening the harvest period.”

Research has addressed the serious soil borne pathogen Phytophthora cinnamomi, resulting in tree decline and death. Lost macadamia productivity resulting from this pathogen has been estimated at $20 million a year.

Efforts to understand the pathogen, the ability of trees to resist the disease and the related soil health issues have led to a range of control strategies growers can use to quickly identify and respond to the disease.

These include assessing the health of trees for signs of infection, selecting tolerant rootstock, and ensuring good drainage and orchard hygiene, along with chemical controls when needed.

The development of a targeted chemical delivery method to treat Phytophthora cinnamomi has reduced spray applications and has been recognised and adopted nationally and internationally to manage similar diseases in other tree nuts.

Mr Burnett says the QAAFI research has helped macadamia growers move from simply coping with the disease and decline in tree health to actively managing it, which has led to improved farm and industry productivity.

Growers have moved from practices such as calendar spraying, with up to five applications of chemical treatments a season, to a watch and respond approach.

“What Femi has done has made us all better farm managers across the board, not just in relation to our broader industry-funded project on Integrated Pest and Disease Management. It is a critical shift that has saved money and improved sustainability and responsible practices in the communities we operate in,” Mr Burnett says.

Future
From his base at the University of Queensland, Dr Akinsanmi’s research and extension continues, with Flower Blight as the latest emerging challenge for the industry in Australia.

It is caused by two novel pathogen fungal species and leads to complete crop failure. Already ahead of the game, Dr Akinsanmi has pioneered the detection and diagnosis of these fungal species. Now he and a team of PhD students are working to understand its biology so control measures can be developed.

Globally, Dr Akinsanmi also leads the international research and development program on macadamia diseases for the International Macadamia Symposium Committee – a role that helps him remain vigilant to any emerging exotic threats to the industry, as well as local ones.

This research has been funded by Hort Innovation, using the macadamia research and development levy and contributions from the Australian Government. Macadamia research at QAAFI is supported by the Department of Agriculture and Fisheries.