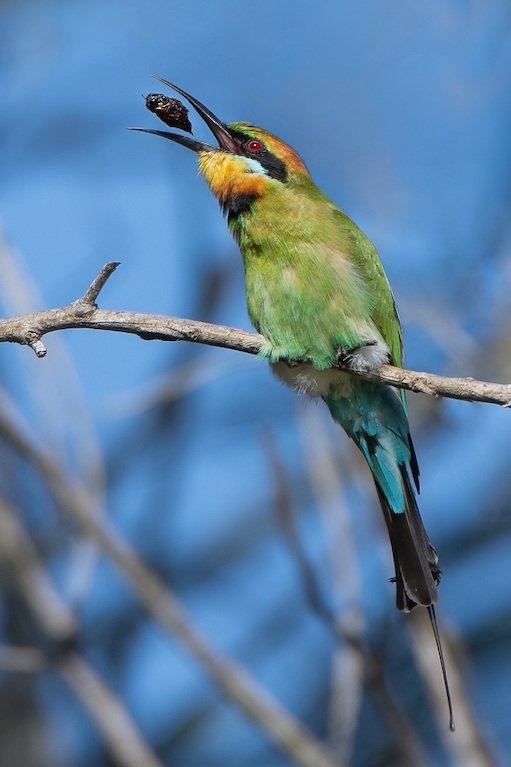 Scientists are checking birds’ regurgitated ‘pellets’ for bee wings in the latest efforts to protect Australian bee populations from threats.

The work – which takes place in the Northern Territory, Brisbane and Townsville – involves teams locating Rainbow Bee-eaters, who typically roost in large numbers at the same sites each night, between March and November each year.

The birds expel indigestible materials, such as bee wings, in pellets which are collected for analysis in a laboratory to help identify if the feral bee species, Asian Honey bees, are active in the area. Asian Honey bees present a serious threat to native bees because they are major competitors for important resources such as nectar and pollen.

The effort is one tool in the armoury of the latest National Bee Pest Surveillance Program funded by Hort Innovation with Australian Honey Bee Industry Council and Grains Producers Australia, and led by Plant Health Australia.

Plant Health Australia National Manager Surveillance and Diagnostics Dr Sharyn Taylor said teams in Queensland and the Northern Territory will be inspecting thousands of pellets from Rainbow Bee-eaters over the next three years as part of the newly funded project.

“Rainbow Bee-eaters are common to much of Australia and well known to beekeepers as a bee predator,” she said. “However, ironically, they also play a vital role in protecting our local native bee populations, and they are excellent at finding bee populations, including exotic species.”

Surveillance officers have also deployed several automated catch boxes in remote locations that send an alert back to officers around Australia, whenever bees have entered the boxes. This technology helps to detect new swarms of bees that arrive at ports from incoming vessels.

Hives of sentinel bees remain the backbone of the National Bee Pest Surveillance Program, placed at the ports of highest risk across Australia and inspected regularly for Varroa mite, the most important target for surveillance.

Hort Innovation Research and Development Manager Ashley Zamek said we are fortunate that a lot of the pests and diseases that are serious threats to honey bees and in-turn the plant industries that are dependent on pollination, are not in Australia.

Ms Zamek said, however, that is not because of luck. “Australia’s largely healthy honey bee population is the result of intensive, world-leading surveillance efforts combined with the vigilance and support of organisations and government agencies across the country. This latest iteration of the bee pest surveillance program continues an initiative that is highly successful because of the deep collaboration involved.”

Almond Board of Australia industry development manager Deidre Jaensch said access to healthy honey bees is critical for pollinating almond crops each year: “This surveillance program is such an important first step in being able to defend ourselves against exotic pests and diseases. With increasing trends in global trade and travel, these exotics are continually threatening the livelihoods of not just almond and other horticulture producers but everyone growing crops that require cross pollination including home gardeners, beekeepers and honey producers.”