A power-packed substitute food for pollinators 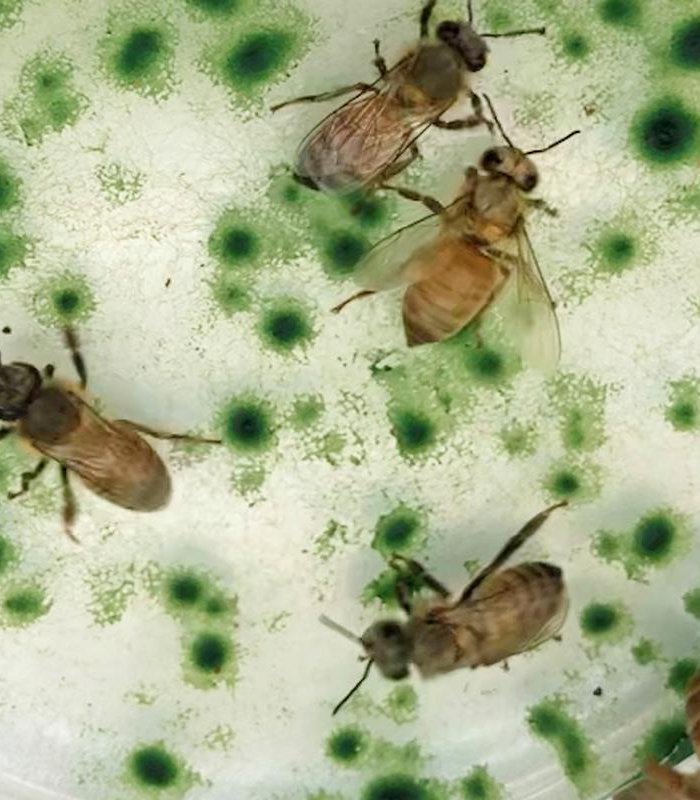 Growers have long listened to the beekeepers lament that pollen substitutes, generally made from soy, egg, yeast, wheat or lentils, aren’t as nutritious as real pollen and bees need to keep up their strength if they’re to work the blooms properly.

Enter spirulina, a nutrient-filled microalga that is not only easy, but cheap, to produce, and according to researchers, a power-packed food that makes for healthier bees.

Vincent Ricigliano is the subject of an American Bee Journal article touting the bee benefits of Arthrospira platensis or spirulina, rich in essential amino acids and a wide variety of lipids commonly found in pollen. Bioassays were conducted using laboratory-grown spirulina versus bee-collected pollen and commercial pollen substitutes with spirulina producing biomarker profiles indicative of elevated nutritional states meeting or exceeding the other diets.

“We concluded that spirulina has significant potential as a pollen substitute or prebiotic diet additive to improve honey bee health,” said Mr Ricigliano, a USDA researcher.

“Because bee nutrition has become a major factor in colony loss, we focused on honeybee nutrition and the interactions between nutrition and genetics with a goal of improving honeybee health and productivity, especially as it related to agricultural pollination,” he said.

Mr Ricigliano noted that major stressors for honey bees included parasites and pathogens, things like the Varroa mite and viruses associated with it as well as other pathogens. “The effects of these pathogens are exacerbated by malnutrition and bees put in a monocrop floral environment just can’t sustain the nutrition they need,” he says.

Commercial beekeepers typically use nutrition supplements to keep their hives healthy and disease resistant, but efforts are now being made to up that ante by supplementing that nutrition. Microalgae is being looked at as a high nutrition source that is sustainably produced.

“In fact, USDA recently changed the classification of algae from a supplement to a crop, so there is a lot of potential to fill a variety of needs. Our research is the first real report of blue-green algae, technically a cyanobacteria, that looks very promising as a supplemental food for bees.

“When bees are fed nutrition supplements, they’re generally mixed with sugar and made into a kind of hamburger patty that is put underneath the cover of the hive to supply a source of protein they might not otherwise get from the environment leading up to their pollination services for tree nuts.  The supplements keep colony size large and healthy leading up to pollination.”

“Research results are pretty convincing that blue-green algae is a very promising nutrition source and there’s a ton of potential to grow algae in the Western United States,” said Mr Ricigliano. “Algae production looks like a promising way to make non-arable land productive and produce valuable proteins and lipids that can be used to feed honeybees, livestock, and human beings.”

So, how to convince beekeepers there might be a better way? “The California state beekeepers actually funded some of our field trial research into blue-green algae for commercial hives, so we’re kind of on the front lines with this work in terms of transporting it from a laboratory to a commercial environment,” he said.

Bottom line? “Instead of feeding them soybeans, you could feed them a nutrient-dense algae that has all the amino acids required for growth and protection of their immune systems, and in the process, make the colony sizes larger because larger and healthier colonies mean improved pollination,” he said.

Some of the more adventurous entities are already starting to include algae products and are learning the match between algae and honeybees is a beneficial one.  “If you look at the amino acids required by bees, to both grow their colonies and have a functioning immune system, they match up almost perfectly,” he said.