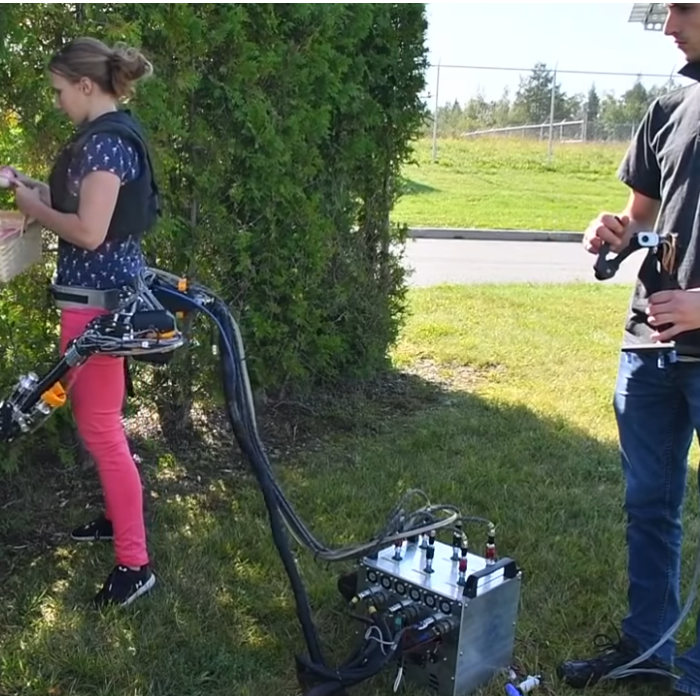 At the International Conference on Robotics and Automation during early June, researchers from Université de Sherbrooke in Canada demonstrated a waist-mounted remote controlled hydraulic arm that can help with all kinds of tasks.

The type of wearable robotic arm is known as a supernumerary robotic arm. The system created by the Canadian researchers (in partnership with Exonetik) has three degrees of freedom and is hydraulic, actuated by magnetorheological clutches and hydrostatic transmissions with the goal of “mimicking the performance of a human arm in a multitude of industrial and domestic applications.”

The hydraulic system provides comparatively high power, but the power system itself is connected to the user through a tether, minimising how much mass the user has to actually wear (and keeping the inertia of the arm low) while also limiting mobility somewhat.

The robotic arm itself weighs just over four kilograms, about the same as a real human arm. It can lift 5kg, and has a maximum end effector speed of 3.4 meters per second. The researchers suggest that adding some sensors could allow the arm to do things like pick vegetables and fruit next to the user, as well as do more collaborative tasks, like providing tool assistance.

It coud be considered as a co-worker, either directly increasing productivity by performing the same task as the user in parallel, or doing some different tasks in order to free up the user to carry out tasks that requires creativity or judgement.