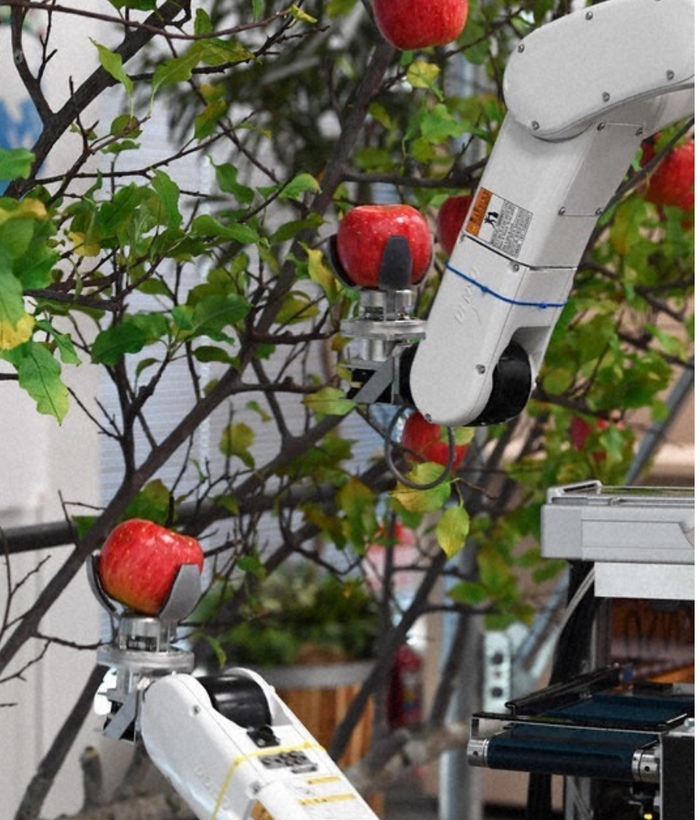 Japan's National Agriculture and Food Research Organization (NARO) and other bodies have jointly developed a prototype of a robot that automatically harvests fruit including apples and pears.

They are aiming to commercialise the product in two years. Shinnosuke Kusaba, head of NARO's production distribution research area explained, "We would like large-scale farmers and others to use it (the robot) to increase yield as workers in the fruit tree industry are decreasing due to the aging population."

Bodies including NARO, based in the Ibaraki Prefecture city of Tsukuba, auto parts manufacturer Denso Corp. and Ritsumeikan University are working together on development of the robot. It can pick a fruit in approximately 11 seconds, which is about the same speed as a person, and collect around 300 pieces of fruit in an hour.

The two-armed robot moves using a self-driving car made from a modified golf cart. Its camera can capture a piece of fruit, which one of the arms grabs and spins around to pick. The collected produce is put in a container on top of the bed of the car. When the container becomes full, the robot automatically changes it to an empty one. When the camera detects the next piece of fruit to be picked, the robot moves onto it.

The robot uses cutting-edge technology to identify fruit based on deep learning, through which artificial intelligence learns from automatically identifying characteristics included in data. Using this technology, researchers fed the AI 1500 pictures of pears. As a result, in the case of Japanese pears, it can recognise ones that are ready to be eaten based on their ripeness, which is judged from the color of the dent at the bottom of the fruit.

The robot can only be used for fruit whose shapes are easy to identify using a camera, so NARO and other bodies also made efforts to improve the shape of fruit trees. They developed a V-shaped tree by using a grafting technique so that the branches make a vertical plane. This tree shape makes it also easy for people to pick fruit while in the same posture, and is apparently expected to shorten the harvesting time by around 20%.

Developers are planning to commercialise the robot in around 2022 and begin renting it out. They aim to sell the robot along with the self-driving car and containers at a cost of six million yen (roughly USD58,000) or less in around 2025.