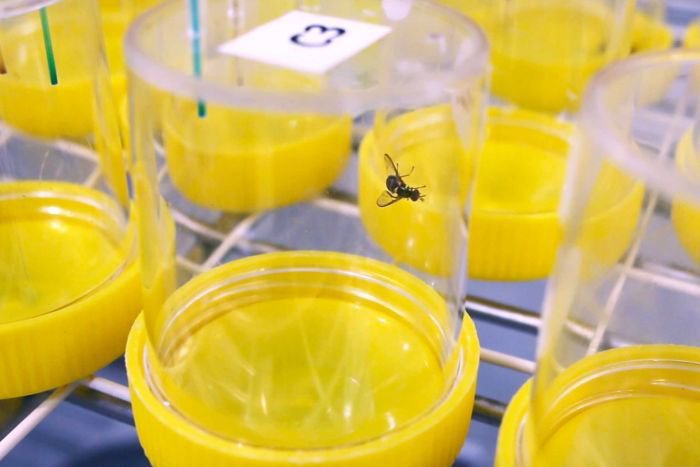 Australian researchers have developed a new type of fly food that can help double the number of "sexy" sterile Queensland fruit flies being reared in laboratories.

The flies, which are being bred at the National Sterile Insect Technology (SIT) facility at Port Augusta in South Australia, will be released in 2019 in a bid to reduce wild populations of the major fruit pest.

The new food source comes in the form of a gel, made from agar, and includes types of yeast, sugars, anti-fungal agents, vitamins, and minerals to help the flies grow.

"The factory was designed to produce up to 50 million flies a week, but we are quite confident now we can easily get at least 100 million out of the factory," Professor Phillip Taylor from Sydney's Macquarie University, said.

"The mixture of sugars and other nutrients targets what the insects need, so we can produce the flies in much greater numbers than the tradition production methods."

Professor Taylor is part of the Sterile Insect Technique Plus (SITplus) partnership, a group of horticulture industry and government stakeholders working to reduce the threat of Queensland fruit fly.

The sterile flies will be released to mate with wild females to collapse wild populations in fruit fly-affected horticulture growing regions, or will be released in areas where new outbreaks occur.

"Not only do these new diets produce more flies, and produce them more quickly, with more consistency and higher quality, but there is also much less waste.

"Traditional diets have a lot of waste left over, but with this new one, almost all of it is converted into flies."

"Queensland fruit fly is a serious issue for Australian horticulture, costing it more than $300 million each year in lost markets and through damaged produce," Mr Lloyd said.

"This is truly an exciting development for Qfly management in Australia, and this work is putting Australia on the world map in sterile insect technology research."

Professor Taylor said other researchers in the SITPlus partnership were currently working to develop the most handsome and irresistible sterile male Qfly to attract females, ahead of trial releases next year.

"So we need sexy flies, because if they are not surviving or not mating, then it won't work.

"We are still doing a lot of work to develop male sterile strains, and there is work being done on what drives the ecological and sexual fitness of these flies."

International scientists are keenly watching the developments in Australia as local scientists build up their arsenal of sterile flies ahead of the release.

"There are other factories and research groups around the world focussing on similar issues, such as food, and in some ways they are ahead, but in other ways they are now falling behind us," Professor Taylor said.

"We are looking at this fresh, and challenging all the basic preconceptions and saying 'can we do things better?'

"But if other factories could adapt to these technologies, there would be huge advantages around the world."

The SITPlus project is supported by the South Australian, New South Wales, Victorian state governments, by the Federal Government, Macquarie University and a range of levy-paying industry groups.