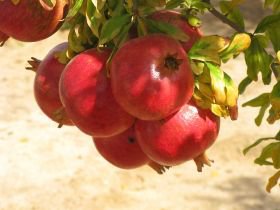 Peru is expected to export some 50,000 tonnes of pomegranate by 2020, and according to Omid Rad, chief executive at Group Kinetica, Australia has the potential to rival the South American giant.

Mr Rad said that Australia can take note of its success, as Peru has increased its export base from a conservative 4,300 tonnes in 2013 to a predicted ten-fold as 2019’s export volumes are forecast over 44,000 tonnes.

In a report prepared by Coriolis for AgriFutures, pomegranates were identified as a key emerging industry in Australia. Last October, AgriFutures put a call out for R&D to support emerging industries that could reach or exceed a threshold of A$10m per annum in the next five years.

Traditionally Australia’s pomegranate industry has been domestically-focused, with no exports to date, but because of interest from Asia, Rad said he’s received a flurry of enquiries from expansion of existing orchards to growers moving into the industry.

“If we take the enquiries PomPersia (Group Kinetica’s brand) has received in the past six months and materialise them in real terms, meaning all the people who have spoken with us were to go ahead with establishment of the orchard sizes they were contemplating at the time, we would be doubling production by 2023,” he said.

Rad said he hopes the case of Peru will serve as an example of the opportunity that exists for Australian pomegranates.

Currently the Southern Hemisphere only produces less than 1.25 per cent of the global pomegranate supply.