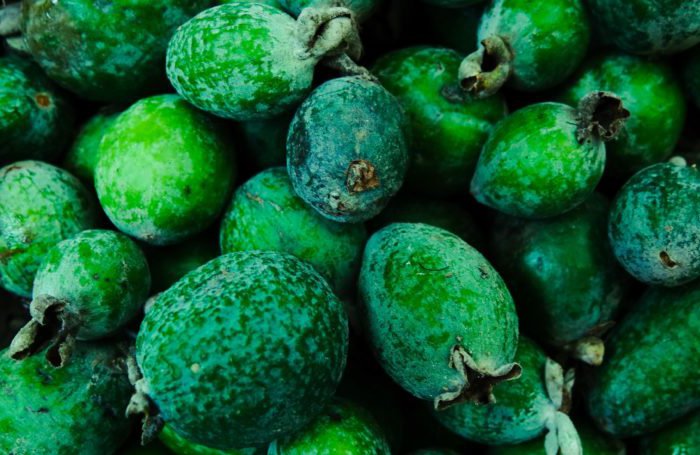 David Arnold first planted the niche orchard in the Riverland in 2011 and now has more than 300 trees on the G.M. Arnold and Son’s Waikerie property

The feijoas have become a sound commercial crop among other orchards bearing exotic fruits such as Buddha’s Hands, pomelo, pomegranate and quince.

“The feijoas have about a six week harvest and we finished picking about a week ago,” family business manager Arnold said.

“In the last couple of years we’ve finally found our stride with them and we’ve got the crop going well along with enough markets to get them out quickly, otherwise you need to get them into the cool room straight away to chill them.”

Last year much of the crop was exported to Hong Kong but Mr Arnold said this year there was strong demand in Australia including at Coles supermarkets – and the fruit sold particularly well in areas with more New Zealanders.

“Kiwis know the most about them and love them the most, the biggest commercial areas of the crops are in New Zealand,” Mr Arnold said.

The orchard was first planted as a fill crop on the Riverland property with the help of a State Government Riverland Futures Fund grant, as an alternative to its navel oranges, Valencia oranges, grapefruits, limes and lemons.

Mr Arnold said different pruning, nutrition and watering trials on the property had seen the feijoa crop size improve and grow into a more commercially profitable proposition for the business over the past few years.

Now the business he runs with brother Shaun was looking at possibly expanding the feijoa orchard, but Mr Arnold said it was a trickier crop to produce as the fruit is small and must be hand picked.

Feijoa trees are native to Brazil and their vitamin C-rich fruit can be cut in half horizontally and its jelly flesh scooped out like a kiwifruit to eat fresh – or the fruit can be used in pies, cakes, jams, jellies or chutneys.

G.M. Arnold & Son has grown citrus fruit since 1915 and has over time added more exotic fruits sought after by chefs and enthusiasts, including Buddha’s Hands or Fingered Citron.

Mr Arnold said the Bhuddha’s Hands being picked now usually had strong markets but demand for the fruit, sought after for religious ceremonies, cooking, floral art and fragrances had waned during the COVID-19 pandemic.

At the moment, the business has about 12 bins of picked fruit that has particularly good zest, looking for a home.

Other trees grown on the property include lemonade fruit – a cross between mandarin, lemon and orange – and the increasingly popular ‘Arnold Blood’ blood orange.

Newer plantings on trial include mango and, at the request of Adelaide provider AMJ Produce, a yuzu citrus from Japan.

One McLaren Vale gin maker teamed up with fruit and veg wholesaler Margy Abbot of AMJ Produce to create a yuzu gin under the Settler’s Gin label a few years ago, using fresh citrus from the Riverland crop.