The sensors are installed in the soil at 10cm and below (30–40 cm) and monitor soil moisture every 15 minutes.

“This information is then sent to our computer via the cloud. The data will be processed by a computer algorithm along with the collected weather data, plant data, and management specifications,” Assoc Prof Ashwath said.

Assoc Prof Ashwath said that when someone waters a garden, paddock, farm or park, only a fraction of the added water is used by the plants.

“The most part will evaporate, or get lost into the gutter via runoff, or leach into the soil to end up in local waterways,” he said.

“If the amount of moisture in the rooting zone can be measured, water usage can be optimised, and most importantly, chemical runoff into adjacent water bodies can be prevented.”

As an extension of the moisture sensors, the research team – which also includes Internet of Things (IoT) data scientist Dr Biplob Ray – developed a system that can control irrigation automatically using artificial intelligence. 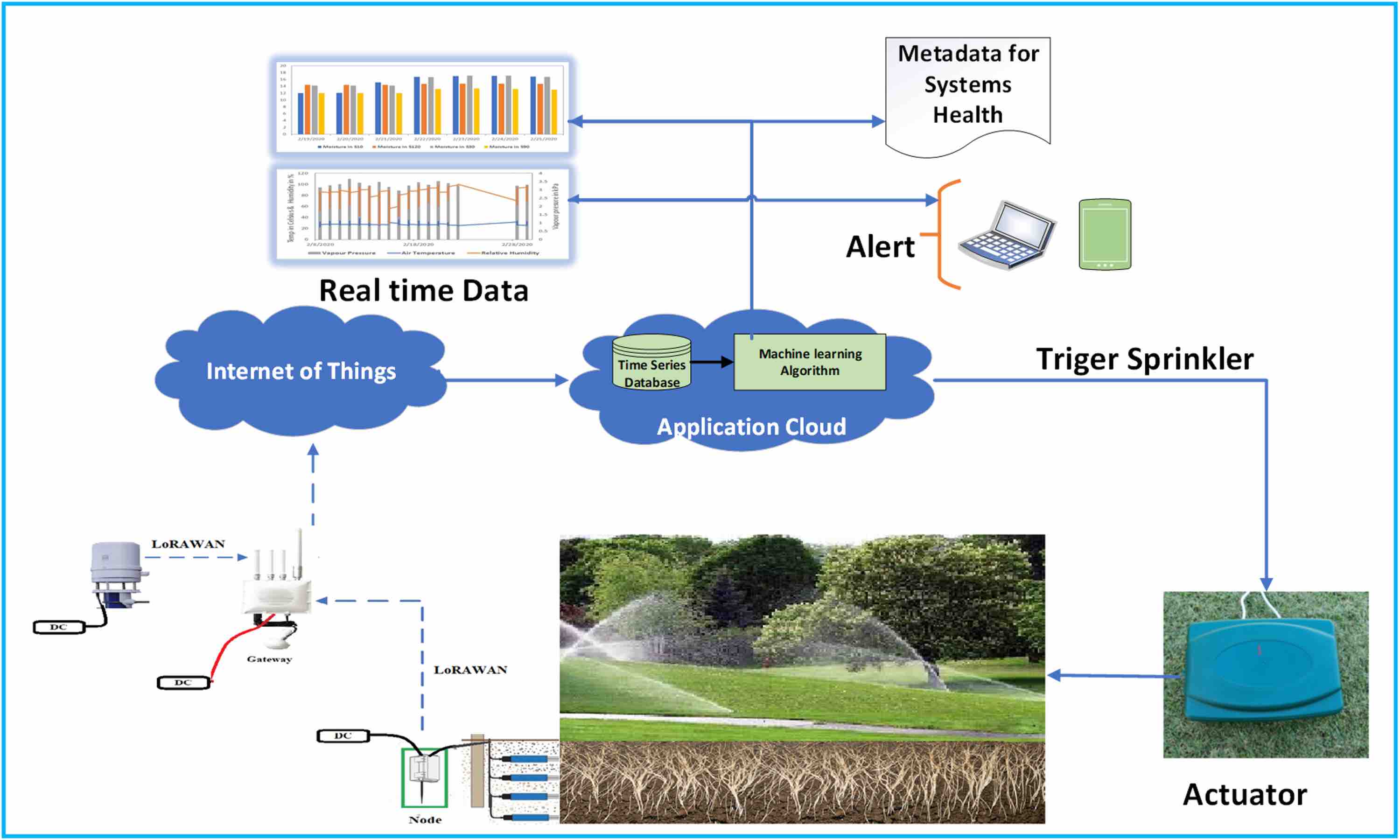 “The computer algorithm we have developed controls the operation of the solenoid. Most importantly, our algorithm collects data, and it learns from past operations. This memory is used every time it tries to irrigate,” Dr Ray said.

The sensor irrigation systems project is currently in the study phase and has been trialled by a number of stakeholders including council-owned parks, to great success.

“Based on our experience, this system can easily save 10 to 30 per cent of the water used by any farms, paddocks, parks or gardens, meaning not only are they helping to save water, but are also proving significant cost-savings,” Assoc Prof Ashwath said.

“Public park systems, like many paddocks and farms, are constantly exposed to various pressures such as rainfall events, temperature variations, gusty winds, changes in relative humidity and plant’s ability to use water (such as winter versus summer).

"Furthermore, the parks are established on a variety of soils. Since the composition and depth of soils differ significantly from one park to the other, and the type of plants, grasses and trees also differ, predicting the water requirements of the parks system would become extremely complicated.

“Through a number of trials, our systems have proven to combat those hurdles.

"Soil moisture maps have allowed us to identify locations of interest within the park so these locations could be used to install moisture sensors. The moisture sensors and the micro-weather stations were then connected to the Internet of Things (IoT) system for continuous and real-time monitoring.

"The signals received from the soil monitoring systems (both Dual EM and IoT-based moisture sensors) were calibrated to actual soil moisture content by taking soil samples from representative locations.

"The soil profile, localised weather data and calibrated dataset from both Dual EM and IoT-based moisture sensors were then used to build a computer model based on machine learning to manage the watering system of the public parks.

"In our machine learning-based approach, our model not only learns for making better decisions in the future, but it can also predict total water usages for a specific time.

"At the end of the day, this holistic ‘smart watering’ approach will save water resources and minimise seepage and nutrient leaching, while ensuring that parks, paddocks, gardens and farms meet the expectations of the end-users."

Assoc Prof Ashwath said the project has the potential to be rolled out to other organisations that would benefit from irrigation research.

“This study can be applied to parks, paddocks, farms and other sites, and CQU is calling on businesses and/or organisations to get in touch if they’re interested in getting involved.

“We know that water is a precious commodity, so water-saving initiatives like this one can only be a good thing.”