What are the potential mango pollinators in the NT? 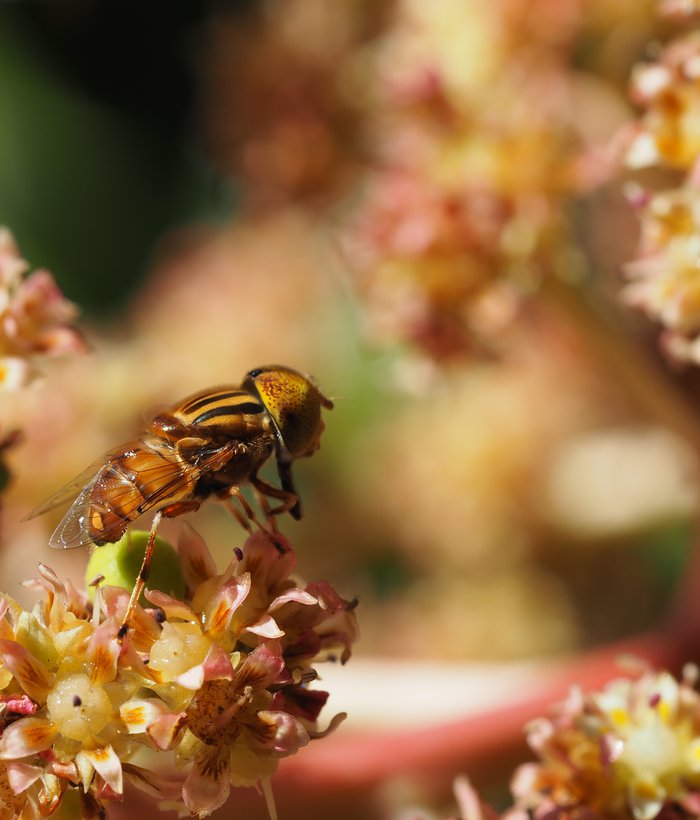 *Mango (Mangifera indica) is one of the most widely grown and economically important fruit crops worldwide. In Australia, it has been cultivated throughout the tropical and subtropical regions such as the Northern Territory (NT) and Queensland (QLD), as well as some regions of Western Australia (WA) and New South Wales (NSW).

A typical mango tree has hundreds of pyramidal panicles, which can grow up to 30cm long and produce thousands of tiny flowers of about 5–10mm in diameter. Mango has two types of flowers: male (staminate) and hermaphrodite (or ‘perfect’) flowers.

The flower sex ratio varies between cultivars, environmental conditions and even among trees of the same cultivar. The importance of insects in mango pollination has frequently been demonstrated.

Globally, a number of insects, including different species of honeybees, stingless bees and flies, have been recorded as regular mango flower visitors, but little is known about mango pollinators in Australia.

Gaurav Singh, a PhD student at Western Sydney University, and his supervisors are investigating the pollination efficiency of stingless bees and other wild pollinators in mangoes. They conducted floral visitor surveys in plantations of cv. Kensington Pride mangoes at eight field sites in Darwin and Katherine regions of the NT in 2019.

The foraging behaviour of major flower visitors was studied to see how long they spent on each mango flower, how many flowers they visited in a unit time, and what resources they collected. The number and proportion of mango pollen grains on different insects’ bodies were also counted to determine their potential as mango pollinators. Fruit numbers in the mango orchards were recorded at 30 days after full bloom to determine whether insect visitation increased fruit set.

These investigations showed that a native stingless bee, Tetragonula mellipes, was by far the most abundant flower-visiting insect, followed by a hoverfly, Mesembrius bengalensis, and then blowflies, Chrysomya spp. T. mellipes actively foraged for both nectar and pollen, while hoverflies and blowflies foraged for nectar only.

T. mellipes spent the longest time on mango flowers, whereas M. bengalensis visited more flowers per minute. T. mellipes carried the highest mango pollen load and the highest proportion of mango pollen on their bodies, compared to flies and other native bees. Fruit set in the surveyed mango farms showed a positive correlation with overall insect visitations, particularly from stingless bees and flies.

Owing to their small size, T. mellipes can fit into the middle of a mango flower with their abdomen and legs actively contacting reproductive parts of the flowers, which gives them better opportunities to transfer pollen between flowers. Surprisingly, only a few honeybees, Apis mellifera, were recorded during the surveys at any of the eight farms in the NT, which suggests that mango flowers are not a first-choice food source for this species.

Mr Singh said native insects, particularly T. mellipes, frequently visit mango flowers in the NT but that they occur in lower numbers towards the centre of the orchards. Therefore, locating stingless beehives within mango plantations may increase their abundance and ability to provide pollination services throughout the crop, potentially increasing productivity in mango farms.

“In 2021, we aim to confirm the contribution of T. mellipes and other potential pollinators by bagging experiments, as well as investigating the pollination efficiency of flower-visiting insects by single-visit pollen deposition experiments,” he said.

For further details, please contact Gaurav Singh on g.singh4@westernsydney.edu.au or 0413 530 230.

We would like to express our sincere thanks to the staff and management of Cheeky Farms, Jenko's Mangoes, Skliros Produce, Tou's Garden, Manbullo, and Peter Docking, for allowing researchers to work and stay on their properties.