This robot gripper can lift 100 times its own weight 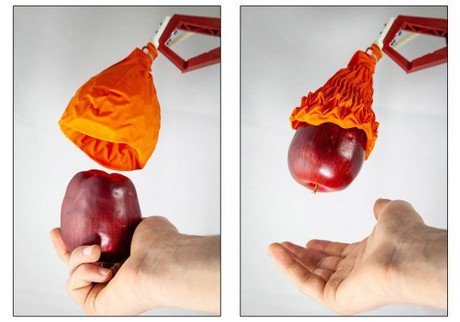 If someone asked you to imagine a robot, says Daniela Rus, a professor at MIT’s Computer Science and Artificial Intelligence Laboratory (CSAIL), you’d probably think of a human-shaped bot or some heavy-duty industrial robot arm. “But for me, I would like to see a change,” she tells The Verge.

The latest work from her team at MIT is a perfect example. It’s a robot gripper that’s designed to pick up objects, but its looks are unconventional, to say the least. Visually, it has more in common with a rubber tulip or a deflated balloon than a sci-fi robot hand.

But it’s this unique look that makes the gripper so potentially useful. Underneath its rubber skin is an origami skeleton that’s shaped like starfish. As gas is pumped in and out of the gripper’s airtight enclosure, the whole device opens and closes like a flower. This allows the device to pick up delicate objects without harming them, while still maintaining a strong enough grip to lift 100 times its own weight.

“By combining this foldable skeleton with the soft exterior, we get the best of both worlds,” Rus tells The Verge. “I’m excited about using such a robot hand to start grasping groceries.”

Soft robot grippers like this aren’t new. Over the past decade, the field has experienced a boom, with engineers looking to take advantage of soft machines of all shapes and sizes. One natural use case is logistics: handling items in warehouses and factories. Although much of this work has been automated, humans are still widely employed by companies like Amazon to pick and sort individual items, packing them into bags and boxes.

This is because traditional robot grippers made of metal and hard plastics struggle with delicate items and irregular shapes. The old cliché of an out-of-control killer robot chanting “crush, destroy” isn’t too far off here. Your average factory robot today couldn’t unpack your shopping without turnings eggs into omelets and oranges into orange juice.

Soft robot grippers look like the best solution to this problem, and the past few years have seen an explosion of this technology. Labs like CSAIL as well as commercial companies like RightHand Robotics have all gotten in on the action, developing everything from inflatable robot hands to beanbag-like grippers to modules shaped like octopus tentacles.

Rus says her new gripper is a better solution than any previous design though. Its tulip shape means it can approach objects from a variety of angles, as opposed to a hand gripper, which usually has to come at an object from the side. And because of its origami skeleton, which Rus and her team developed in 2017, it has strength as well as flexibility.

As to why such devices haven’t been adopted more widely yet, Rus says that’s because commercial solutions have yet to catch up with “innovations coming out the lab.” Another reason might be institutional inertia. Once companies have invested in expensive equipment, replacing it isn’t an easy decision. Especially if updating your hardware might mean rearranging your entire workflow.

There’s no doubt that the field of soft robotics continues to spit out bizarre and potentially useful creations. And if Rus and her colleagues get their way, it won’t be long until our mental picture of what a robot looks like changes for good. “This is a first, to our knowledge, in creating a robot hand that can do such useful work,” says Rus.