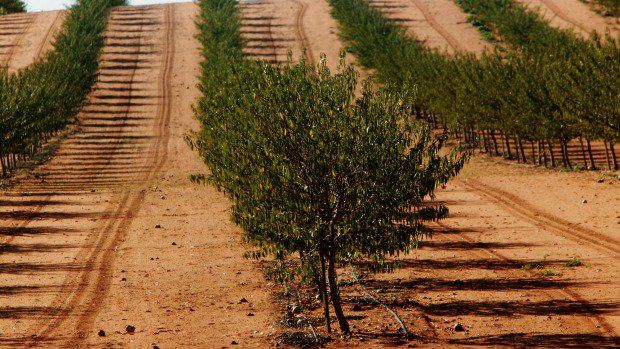 Amid the worsening drought conditions, rural valuers Herron Todd White have warned that the rising cost of water could impact on future demand – and therefore prices – of properties planted to permanent, water-intensive crops such as almonds, avocados, grapes and citrus.

Set within the context of "one of the worst droughts ever recorded" in Victoria and as the federal government's Regional Investment Corporation prepares to issue the first of up to $2 billion in drought loans, HTW September Monthly Rural Report highlighted how the availability and cost of water was impacting on returns for "higher-value crops".

"We expect that concerns around the cost of water could reduce buyer demand for horticultural properties, however this will only become evident over the next six months or so," wrote HTW Mildura valuers Shane Noonan and Graeme Whyte.

"Returns remain good for most commodities which will justify the cost of leasing water, even though it will reduce profit," the valuers said.

They also observed that the cost of leasing annual water allocation had now "snuck above $300 per megalitre, which will impact on the return for particularly wine grapes but also higher value crops such as almonds, citrus and table grapes".

On the NSW North Coast, HTW valuer Angus Ross said irrigators who pump from rivers and streams "will be getting nervous" at the prospect of "drop pumping restrictions being triggered which limit the water that can be taken".

"This may affect dairy farmers, blueberry growers and other intensive horticultural operations in particular," Mr Ross said. He added that in NSW,  the ongoing drought was "starting to have an impact on some buyers' decisions to pursue rural property".

Mr Lane said there was increasing demand for water rights, with values heading towards $5000 per mega litre in the Victorian market".

"The government is also active in the water markets, adding to price pressure," he said.

Matt Horne, water broker at Elders Rural Deniliquin, said growers in NSW were having to pump in water, at a higher cost, from Victoria and South Australia.

"Water prices are edging towards those last seen during the 2005-10 millennial drought," he said.

Mr Horne said demand for water from permanent plantings like almonds was placing pressure on irrigated crops and the dairy industry. It has also made quality properties with good ground and surface highly sought after, he said.

Debate about the availability and price of water for many struggling farmers has become intense amid the severe drought affecting large parts of NSW, Queensland and Victoria.

But at the corporate end of town, water funds run by Blue Sky, Duxton and others have boosted returns and earned higher performance fees on the surge in water prices.

Others, like ASX-listed agribusiness trust Rural Funds Group (RFF), have invested heavily in water entitlements to ensure sufficient irrigation for their almonds, cotton, grapes and other crops. RFF has also been able to sell any unused water rights at high prices.

Rural Funds managing director David Bryant said that due to the drought, the spot price of water had tripled to about $340 a megalitre.