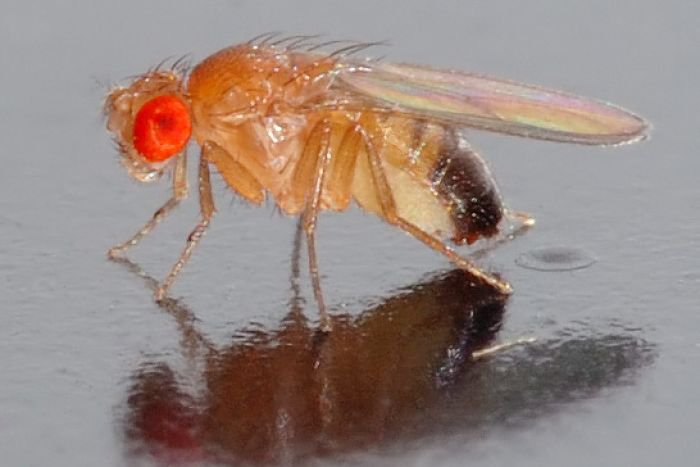 The study, led by academics from the University of Melbourne found fruit flies living in the south eastern part of the country, including Victoria, New South Wales and parts of South Australia, were evolving to resist the effects of common sprays.

It found fruit flies living in temperate areas were also better at resisting insecticides than those living in more tropical areas.

The study focussed on the fruit fly's resistance to imidacloprid — the world's most used insecticide.

"The genetic response to insecticides is heterogeneous across populations and environments, leading to more complex patterns of genetic variation than previously thought," the study, published in Nature Ecology and Evolution, said.

"That's not only insecticides or temperature or humidity, they have to cope with all the stresses all at once," he said.

It's a game between a bait and a target.

"So, an insecticide being the bait and its molecular target being generally located in the fly's brain.

"The first and most common mechanism is that the target changes its shape and the insecticide can no longer reach the target."

Dr Fournier-Level said agribusinesses across the world needed to instead look at genetic and ecological factors to manage the pest.

"What is definitely over is this era which started in the 1940s where we could just use one barrel of chemical product to actually deal with any and every species," he said.

He said if we know tropical fruit flies do not evolve to resist insecticides, we could use them to help breed out the insecticide resistance in temperate flies.

"Therefore, we could diminish the level of resistance in the population.

"Once we figure out what is the actual molecular mechanism at the gene level that confers one thing over the other, play one against the other."

The Federal Government is expected to spend more than $20 million on fruit fly management over the next four years.

While the research found flies in temperate areas, such as Victoria and SA have built up a tolerance, Mr Whetstone said it was the Queensland fruit fly that was dangerous to the state's agricultural economy.

He said there were better ways of controlling fruit fly than using sprays.

"At Port Augusta, we're breeding the larvae of flies that are going out there sterile for a reduction in numbers if there is an outbreak by a biological method," Mr Whetstone said.

"This is the answer.

"We would like to see all horticulturalists not having to use chemical control."

Great model for studying pest resistance
Researcher, Dr Emily Remnant, who works in insect genetics at the University of Sydney, praised the study for looking at environment as a whole rather than focussing solely on the interaction between an insect and an insecticide.

"It shows that in warmer climates it's more difficult for insect populations to evolve to become more resistant to chemicals and so that suggests that tropical crops might be have some benefit in this sense," she said.

Dr Remnant said the study was an excellent model for studying pesticide resistance.

That's because the common fruit fly was exposed to the same chemical pressures other insects were.

It also shares similar genetics to the Queensland fruit fly.

"It's a case of life and death for an insect. "If there are individuals flying around on that crop that happen to have some slight genetic advantage they're going to survive no matter what type of chemical you try.

"It's important to continue monitoring insect populations regardless of the location because it's possible that insecticide resistance could arrive anywhere," Dr Remnant said.