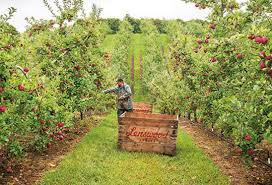 Adelaide Hills apple and pear growers are pushing back against a move to bar genetically modified crops from the region, arguing that the right to use GM varieties in the future would help them keep up with competitors.

Adelaide Hills Council is among nine, including Mt Barker, Barossa, Gawler, Playford, Onkaparinga, Yankalilla, Alexandrina and Victor Harbour, which have recently voted to apply to be exempt from GM crops within their borders.

In May, the SA state parliament passed legislation lifting a 16-year-old ban on GM crops in SA, with councils given six months to apply for exemptions if they consulted with their local community and demonstrated an economic benefit.

Adelaide Hills Council received 266 submissions on the issue, with 76 per cent of respondents wanting to keep the Hills GM-free.

Adelaide Hills deputy mayor Nathan Daniell said business and association feedback was that allowing GM into the region could jeopardise local exports worth more than $10 million a year.

“This is an unacceptable risk for our local producers,” he said.

“Seeking this exemption is a once in a lifetime opportunity where our region has a lot to gain and little to lose.

“Remaining GM-free protects our premium clean and green brand while not disadvantaging local producers who support GM crops, given there are no GM food crop varieties currently available for commercial cultivation that favour producers in the council area.”

But not all Hills producers back a GM ban, with the Apple and Pear Growers Association saying it could become a commercial disadvantage

“The majority of our members were keen to allow GM crops in the Adelaide Hills area,” she said.

“There aren’t currently any apple and pear GM crops available in Australia for growers. But really, if that technology became available in the future, the general consensus was most growers would not want to be excluded from being able to access those varieties.

“If they weren’t able to access those crops, and growers in other regions were, then that could potentially put them at a competitive disadvantage to some of the other regions.

“So, even if the GM moratorium is kept in place across the Hills, our industry would certainly like the opportunity down the track …  that we can revisit and have that conversation again.”

“The majority of the state’s crops are grown within the Adelaide Hills Council region, although there is a little bit within Mount Barker as well,” she said.

“It would be very challenging if neighbouring councils had different policy positions as well, because some of our growers actually have orchards in both council regions.

“So, whatever the final decision is, it should be the same across the whole region otherwise it’s just going to create complexity and challenges.”

Onkaparinga Council last month voted to apply for a GM-free exemption, after McLaren Vale winemakers said the growing organic/biodynamic industry and millions of dollars in exports would be put at risk without it.

“I have to first have submissions by the councils put forward through to the GM Crop Advisory Committee and once it goes through there, they’ll assess it,” Mr Basham said.

“I can’t make it on whether that region wants to be GM-free or not, it’s not an ideological decision at this point in time. If they believe there’s an economic benefit, they would make a recommendation to the Minister for a council region to remain GM-free.

“If there is no economic benefit, they will be making a recommendation to me to not put on a ban of the use of GM in a particular council.”

Mr Basham said that council areas which had not applied to be GM-free could begin planning for the next crop season.

“With just nine of the 68 councils in South Australia applying to be non-GM to date, the vast majority of farmers across South Australia can now make the choice on whether they wish to grow GM crops for the 2021 growing season,” he said.

“Some of South Australia’s most important grain growing regions such as the Eyre Peninsula, Yorke Peninsula and Mallee will all have the choice to grow GM crops in 2021.

“This is a huge win for our farmers, particularly at a time they are facing drought, recovery from bushfires and impacts of COVID-19 border restrictions.”