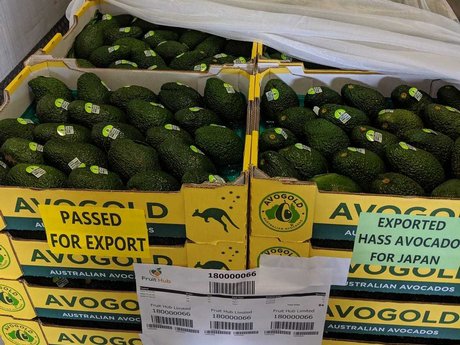 The state gained market access to Japan last year, and sent a few small shipments. But this year, growers are looking to increase supply, and at the same time All Nippon Airways (ANA) are recommencing the route for the first time since 2011.

Jennie Franceschi from Karri Country Produce Pty Ltd, who is involved in the export, says growers are excited about the potential that this new pathway opens up.

"A grower just north of Perth, got his orchard licenced in time for this season. He has a lovely orchard, with some young trees with quality mature fruit," she said. "So, we put it all together, and decided that this would be the best opportunity to start Japan shipments for this season. It's quite nice because it is the first direct flight out of Perth to Tokyo, and it is the first shipment of avocados for the season. Obviously, we will get it up there quicker, but the other advantage of direct flight is that you are less likely to get a cool-chain hiccup."

There was an official launch for Australian avocados in Japan, in Tokyo in December last year, and the Australian Ambassador to Japan, Hon. Richard Court, was scheduled to be on the inaugural flight.

"Sending to Japan, you have to be particular, so it's about getting everything right," Ms Franceschi said. "Last year, we got it up there to go through the process and sign-off on from DAFF and MAFF and be happy that we have a protocol and acted upon it. This year it is expanding on that. It is about getting our systems and processes in place so that it is quite seamless."

While this shipment will only be 504 trays on a PMC, it is hoped that more volumes can be sent by sea freight, later in the season to cater to the growing demand for the Australian fruit. Karri Country Produce says it will, of course, continue with air, utilising the direct ANA flights until volumes and maturity increase and sea freight is trialled.

"I did some sensory panel work up there, which was good to gauge how the Japanese consumer felt about Australian avocados. This proved very promising with some great feedback. Japan have been very eager for us to start but I felt it was very important to wait until the maturity was right so our customers have a great eating experience with Australian avocados."

Opening up this pathway, and getting the systems in place is vital, according to Ms Franceschi, with the industry expecting a significant growth in volumes in coming years.

"It's nice to raise a bit of awareness for it," she said. "Growers are really going to need this. In the South West, it looks like the Barossa Valley, but it is all avocado trees. There's so many in the ground - it is going to be interesting. It's the basic laws of economics of supply and demand, and some may not have realised that you just cannot keep planting and get the same return on investment. You have to work harder for a lot less money. The issue we often find with Australians when it comes to export is they don't commit, they just talk about it. They need to plan more, saying they'll commit x-percent of their crop to export, regardless of domestic, to build the market for when they need it. So, it would be good to engage with them more."