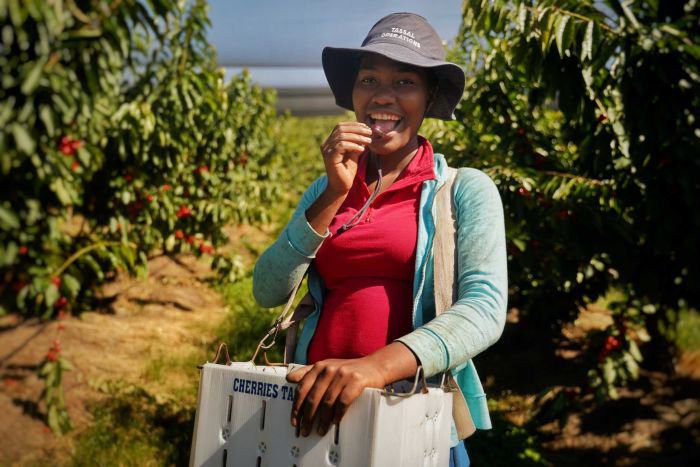 The long and cool spring conditions in Tasmania has delayed the state's cherry harvest — but not all growers are concerned.

Southern Tasmanian orchardist and Fruit Growers Tasmania President, Nick Hansen, said it has been a stressful season, but he has finally started picking cherries in time for Christmas.

"The lack of sunlight in early spring and late spring put us back about a week," Mr Hansen said.

"But we'll pick about 20 tonnes of early [or pre-Christmas] fruit for the Christmas tables in Tasmania.

"After that, at this orchard, we are hoping to pick about 350 tonnes of fruit this season."

He said the upside of the delayed harvest means the cherries will ripen slowly and will improve overall quality.

For fruit grower Tim Reid, his mid-to-late-season cherries are also behind.

"Normally at this time of year it's quite a buzz in the packing shed," he said.

"Forklift trucks and about 300 people are working in there, but it's very ghostly in there at the moment.

"But our [Tasmanian] company tends to stand back a bit from the Australian market, because there are a number of smaller growers who rely heavily on that market."

Mr Reid's mid-to-late-season cherries will be harvested soon after Christmas, with 85 per cent to be sent to over 20 countries in Asia.

"We've got a lot of cherry trees planted and we are going to double our production over the next three years or so.

"We believe the market is there for them and we're quite confident about the future."

Although time adds pressure on his fruit production, one of his biggest concerns remains with low-grade fakes of his cherries being sold into Asian markets.

"In the past we've used a QR code system, but that was superseded last year when a false website was set up in China," Mr Reid said.

"So when you scanned the false QR code on the box, it took you straight to that site and said 'Congratulations, you've got an authentic box'."

This year, he Mr Reid has introduced new technology.

"It's a different pattern on the sticker which can be scanned by new technology that's downloaded from the internet each time you want to scan the sticker," he said.

"Although the warmer temperatures are worrying for orchardists on the mainland, supply should still be meeting up with demand this year," he said

His favourite part of this season was the sense of community he built.

"Pre-Christmas we have about 60 to 70 people. After Christmas, that will triple," he said.

"We love when people come back to the farm and we have lots and lots of repeat pickers and staff.

"They come back and tell us stories of their previous 11 months — it's great."

"We believe that technology will be very difficult to copy."

Mr Reid is looking forward to sending his fruit over to the Asian markets this year, especially in time for the Chinese New Year.

This season has proved difficult for him to predict harvesting times.

"We tried to wake the cherries up a little earlier this year," Mr Hansen said.

"We pulled the rain covers out a bit earlier to warm them up a bit, but then we had some colder weather combined with that so it took us back to normal time.