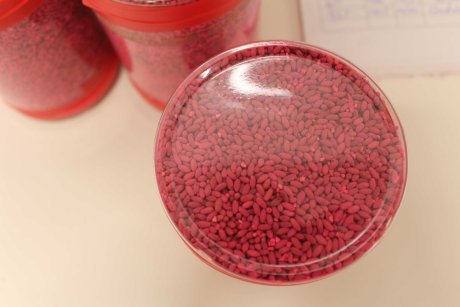 It is now one of two machines which sterilise Queensland fruit flies in a controlled environment, so they can be released in areas where there have been outbreaks of the pest and prevent them from breeding.

After outbreaks in Adelaide and the Riverlands last year, State Primary Industries Minister Tim Whetstone said the machine would ensure the Government could keep up with future outbreaks.

"We have to remember that we have had single-area outbreaks. "Last year in Adelaide we had a number of detections and declared outbreak at Loxton in the Riverlands," he said.

"If we were to have multiple outbreaks we would see there would be a shortfall in the number of flies."

Pilot program has something to prove
Horticulture Innovation Australia organised funding for the facility when it was first established. General manager research, marketing and investments David Moore said the facility acted as a proof of concept for a larger commercial facility.

"Horticulture is worth about $12 billion annually to Australia so we need to prove that this pilot program can work and it does, and then we can pitch for it to be a commercial program in 2022-23," he said.

Ready for production
National SIT facility manager Terril Marais said once the facility received a request for fruit fly it could enter full production in 10 days.

In South Australia, an outbreak can be declared if even one larvae is found.

However, while 50 million sterile fruit fly a week can handle outbreaks Ms Marais does not think it would be enough to handle an established fruit fly population.

Mr Moore said they could learn lessons from horticulture industries overseas, where sterile fruit fly were routinely used in much larger numbers.

"If you look at the facilities in Guatemala and Hawaii they are producing billions of flies a week for a much larger market.

"We need to demonstrate this facility works as a proof of concept," he said. "Certainly we'll need to produce more than 50 million to control multiple outbreaks," he said.