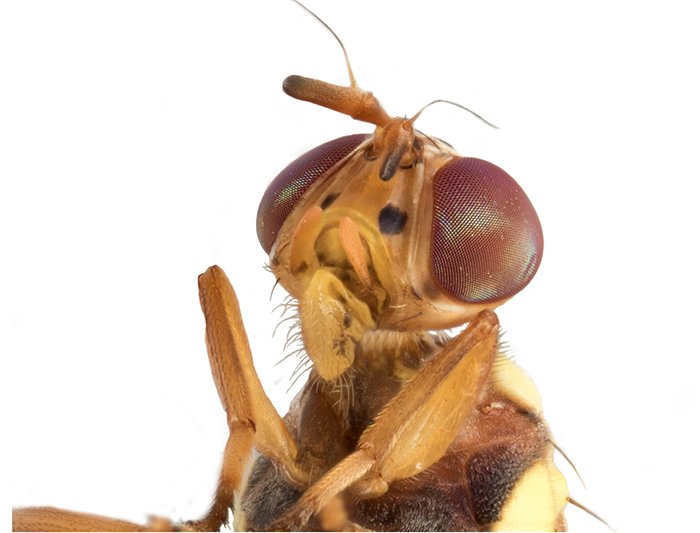 The business of sorting and identifying the thousands of tephritid ‘true’ fruit flies affecting a wide variety of crops grown in Australia has just been made a lot easier.

The Australian handbook for the identification of fruit flies has always been popular with fruit fly diagnosticians, biosecurity workers, and the general fruit fly community. Now that it has been fully revised and updated it’s an even more valuable resource. Additional online information has also been developed via the companion website Fruit Fly Identification Australia.

The leader of the research project that produced these resources, which was supported by the Plant Biosecurity Cooperative Research Centre, is Dr Mark Schutze, formerly of the Queensland University of Technology (QUT) but now at the Queensland Department of Agriculture and Fisheries (DAF).

“This new resource represents a complete overhaul of The Australian handbook for the identification of fruit flies,” said Mark. “We’ve updated all the fruit fly images using fresh material and produced new, tailor-made, molecular diagnostic tools that have emerged from our investment in next generation genomic research.

“Both the hard copy handbook and online resource will, I’m sure, become an invaluable tool for Australia’s front-line diagnosticians to help protect our horticultural and agricultural industries from exotic fruit flies via more accurate and rapid diagnostics.”

Fruit flies are arguably among the world’s most important fruit pests. They appear on almost every continent and millions of dollars are spent annually on their control and eradication. Over 60 target species of fruit flies are included in the handbook and website, shown both as individual flies and in groups of flies that look similar to each other. Importantly, the range of variation within species is also captured.

“Fruit flies are incredibly variable in their colour patterns. We’ve done everything we can to represent as much variation as possible in the new version, as well as showing what flies look like when they’ve been preserved using a range of different techniques,” Mark said.

The research project, website, and handbook were developed in partnership with the DAF, the Western Australia Department of Primary Industries and Regional Development, and Plant Health Australia (PHA), which led the website and handbook development.

Nick Woods, PHA’s Manager, National Strategies & Policy Coordination, said that maps showing where the flies are currently found in the world are included.

“Looking at the maps, researchers can immediately tell if the sample they are looking at is usually found in Australia, whether it is regarded as a pest or non-pest, or if it is an exotic species that is new to the country,” Nick said. “The website contains an expanded selection of high definition images as well as an updated description of the latest DNA techniques and protocols used to identify fruit flies.”

The high-resolution images were taken at QUT under standardised light conditions and ‘stacked’ to produce completely in-focus images, so that comparisons can be made between species and flies can be correctly identified by what they look like.

“For so long researchers have been trying to use images from a wide range of sources, collected and stored under different conditions, which can affect how well the sample is preserved and the colours of body parts that are used to identify flies,” Nick said.

“Another advantage to having the website is that there’s less need to keep the printed handbook up-to-date. As new images come to hand they can be readily included in the list of flies on the site that we could one day find in Australia and need to identify.

“Being able to identify flies by what they look like is only part of the story. Many flies can look superficially the same, so analysing the DNA is sometimes the only way to positively identify a particular species.”

Advances in DNA analysis are included, with detailed techniques available for download and use as recipes in the lab. The website includes a new lucid key for identifying the Dacini species (the group of most direct importance to Australia) developed by Jane Royer of DAF, as well as comprehensive data sheets. There’s also a glossary of terms, but it’s not what you might be thinking.

“The glossary centrepiece is a fly that rotates through 360 degrees, so you can identify the general features of fruit flies from all angles,” Mark said.

There’s more to the site than a bit of fun spinning a fly. This resource is the product of serious science that underpins so many aspects of Australia’s biosecurity system that allows producers to continue to access export markets with their products.