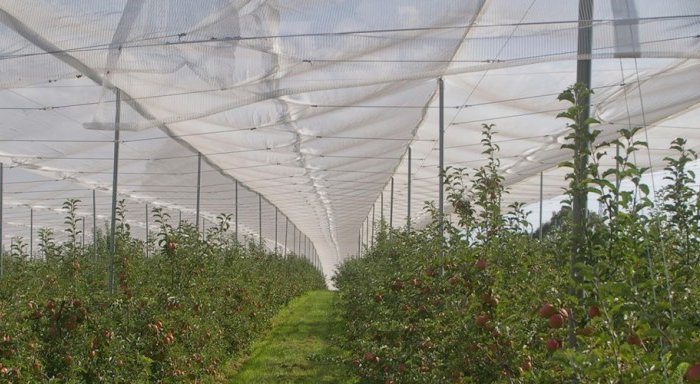 The urbanisation of coastal towns, supported by clearing of native vegetation, has led to flying foxes looking to orchards for food sources.

In a comprehensive assessment for the 2017 Raymond Terrace Flying-Fox Camp Management Plan, grey-headed and black flying foxes were found throughout Tasmania, South Australia, and Eastern Australia, where they are generally found within 200km of the coast. Their nightly foraging radius can be up to 50km from the camp and the animals will travel 500km over 48 hours to move camps. The species also show marked fidelity to camps and food sources. Little red flying foxes are distributed across northern and eastern Australia; and show the same foraging and fidelity behaviour.

For a few years in the early 2000s, the NSW government introduced low-interest loans to encourage growers to net their orchards.

NSW apple and cherry growers, Bernard and Fiona Hall, use variously permanent and drape net over 93 per cent of their total 80 hectares of apple and cherry trees. A few years ago, they were able to access a limited amount of government funding to support their netting program.

“We began netting about 17 years ago because we were being bashed by hail, flying foxes and lorikeets every year,” Bernard said.

“Thousands of lorikeets dine on the fruit where there’s no netting or the nets have no sides.

“But we can only afford to spend so much money on nets each year.”

Bernard suggested a program that subsidised netting for 10 years – at a minimum of 50 per cent but preferably up to 75 per cent – would be ideal. He said the nets needed replacing every few years because of environmental damage.

“Whatever the subsidy is, you’re going to spend double to install netting for each year you can get it,” he said.

He needs to manage his nets to put them away and roll them out each year, because deep snowfalls tear the nets. This is a two-man job, costed at three days/hectare, twice a year.

Taking the nets off the trees for a period has the advantages of enabling natural insect biodiversity that benefits pollination. However, he has noticed the nets need to go out earlier and for longer, because the season of flying fox predation has extended year on year.

“Flying foxes used to come looking for fruit in late March. Now they are arriving in December and they stay until the last apples are picked,” Bernard said.

“Bird and bat damage has increased from two to five per cent; hail damage each year still stands about 25 per cent. In any given year, we stand to lose 30 per cent of the 1800 tonnes of apples we produce.”

Any greater production loss would have a negative impact on the business and its 36-strong workforce – permanent and casual employees – employed in the orchard and packing shed.

A Victorian orchardist – Graeme Jenkins, at Johnsonville – believes the cost of netting prevents new people from entering the industry.

His main purpose in netting trees is to exclude flying foxes, which predate his trees from the start of October to the end of May, though this is not entirely effective.

“The flying foxes have worked out how to get onto the ground and climb up the trunk to inside the net. The wingspan of a flying fox is about four foot wide and when they smash down on the tree, to smell the fruit to find out if it’s ripe, they damage the tree and the net. We’re getting about five per cent wastage because although they can’t get at the fruit, they soil onto it through the net,” Graeme said.

“If the flying foxes arrive three weeks early, before you get the nets on, you’ve lost the fruit. That happened to the crop of Facia Bella pears in January three years ago, before we got the nets over them – they ate all the pears off 60 trees in one night.”