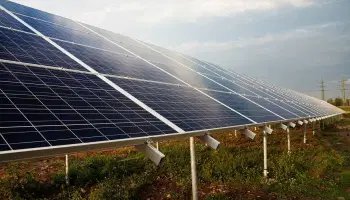 Researchers at Tatura SmartFarm in Victoria are tinkering with using solar panels to protect fruit trees from extreme heat events – one of the many potential applications for agrivoltaics.

Tatura SmartFarm was officially opened mid January by Victorian Minister for Agriculture Mary-Anne Thomas, who also announced the Horticulture Solar Energy program. The program will investigate the impacts of solar energy generation infrastructure in horticulture and the sun protection it can provide fruit trees.

Solar panels are being installed above the pear orchard at Tatura SmartFarm as part of the program. The protection they will provide may help avoid “sunburn”, where extreme heat discolours pear skins, making them harder to sell. According to Agriculture Victoria, sunburn browning in pears occurs at fruit surface temperatures greater than 47°C and necrosis sets in at 50°C.

“Farmers and producers experience the impacts of climate change firsthand – it’s vital that we help them adapt so they can continue to get our world-class produce to markets across Australia and the world,” said Minister Thomas.

In addition to (hopefully) protecting the pears, the solar panels will of course further earn their keep through the generation of electricity. What the cost of this sort of installation is wasn’t mentioned, but it will be significantly higher than sticking solar panels on rooftops due to the structures required. The type of solar panels to be used also wasn’t mentioned, but they are likely to be bifacial as bifacial modules will allow some light to pass through.

This won’t be the first trial pairing pears and solar panels. In 2020, researchers in Belgium set up a pilot plant with a different goal in mind – to protect pears from hail and remove the need for hail nets. Here’s hoping that orchard doesn’t see any South-East Queensland sized hail, as not much can cope with that. Another advantage the Belgium installation is providing is the creation of more favourable conditions for the pear trees – slightly warmer at night and cooler during the day; so this bodes well for the Tatura SmartFarm project.