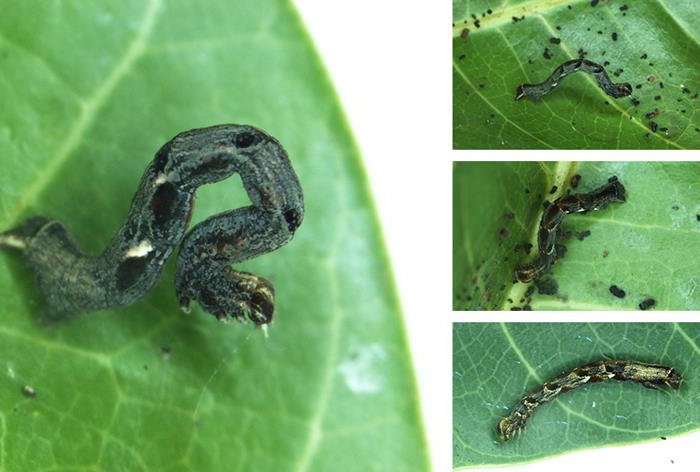 An exotic moth species known as mango shoot looper (MSL) has been officially detected in the Northern Territory.

MSL was detected on vegetation in an orchard in the Darwin Rural Area in March 2022 and confirmed after DNA sequencing in early April.

MSL is similar to five other species of loopers that are found on mangoes in the Territory.

Mango shoot looper is an invasive pest from Asia which is a threat to the commercial mango industry, as well as backyard growers and hobbyists.

Growers, nurseries and travellers are urged to be on the lookout for signs of this exotic pest to help limit its spread:

- The adult moths can fly in localised areas from tree to tree and are attracted to lights on caravans and vehicles. Their spread may be enhanced by strong winds.  Female moths are pinkish in colour and the males are very pale brown or pinkish fawn. Males and females have three rows of brown patterns on the wings the last two having dark brown spots interspersed along the length. Their wingspan is about 20mm across.

- The caterpillars or larvae can vary in colour from yellow, brown to black with a mottled “tiger” patterned appearance. They move onto the leaves to feed and can grow up to 22mm in length. Larvae move in a “looping” fashion and can move to undamaged areas in trees by suspending themselves on silken threads and dropping between branches.

- The pupae are up to 9mm and have a distinctive elongated triangular appearance, starting off green before turning brown as they mature. They are likely to be found in old spider webs as well as on the leaves.

MSL may also be spread by human-assisted movement of infested plant material.

The department is working with other government agencies and peak industry bodies to provide growers with information on management strategies for the current mango season.

MSL is an emergency plant pest.  If you suspect an infestation, you must report it. You can do this by phoning the Exotic Plant Pest Hotline on 1800 084 881.

More information is available at: nt.gov.au/mango-shoot-looper

"Specimens submitted by industry in late March 2022 were collected from vegetative flush in an orchard in the Darwin Rural Area.

"The department will work with industry to effectively manage this pest on a long-term basis.

“We’re focused on safeguarding and growing our industries by carrying out additional surveillance to control and manage the treat this plant pest presents to NT growers and businesses.

“Our current campaign is focused on the Top End and is aimed at providing information on ways to manage this pest.

“We’re asking growers, nurseries and travellers across the Territory to be on the lookout for signs of MSL, particularly on mango or lychee trees.

“If you notice anything unusual or potential signs of this moth, caterpillar or pupae, or other pests and diseases that you have not seen before, protect the NT by calling the Exotic Plant Pest Hotline on 1800 084 881.”