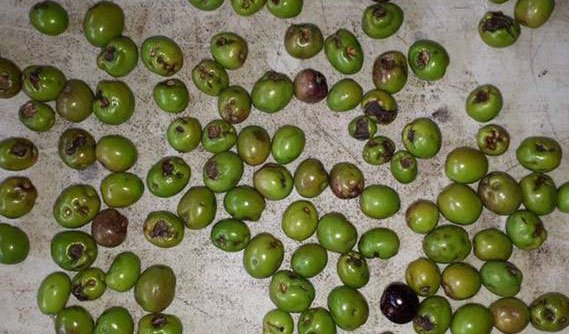 Olive growers across Australia are being alerted to an additional fungal disease which has only recently been identified in olives in Australia.

AOA Biosecurity Representative and OliveCare Administrator Peter McFarlane said that Neofabraea vagabunda (Neofabraea blight, ‘leprosy of olive’) has previously been reported in Australia on apples and pears, with the first report of the disease in olives (Olea europaea) occurring in June 2020 in an olive grove in Central Victoria.

Neofabraea blight is already active in olives in other parts of the world. It was first reported in California in 2005 and has since spread to other parts of the US. It has increasingly been seen in Spain, Portugal and Italy over the last decade, and has the potential to become a substantial problem if left uncontrolled. Known hosts include olive, apple, pear, quince and ash trees.

What to look for

“The AOA requests that olive growers monitor their groves for the above disease symptoms in the coming fruit season, and report any findings to the usual biosecurity agency in your state or via The Exotic Plant Pest Hotline: 1800 084 881,” McFarlane said.

“It is important to note, however, that this is not an overly significant concern, given that Grove Best Practice disease control for Anthracnose can be expected to also control Neofabraea vagabunda.”

Note: If the same or similar fungicides are regularly used on a crop there is a risk that the fungal pathogens will become resistant to these chemicals, reducing efficacy. To reduce the risk, adopt a resistance management strategy involving the rotation of approved fungicides from difference chemical groups.