Mango industry in race to adapt to climate change 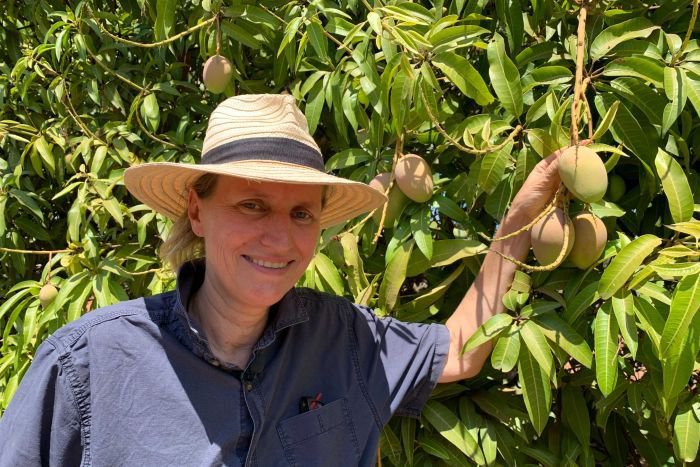 One of the Northern Territory's largest mango farms is already confronting the effects of climate change.

"Rainfall is declining as a trend and prediction of temperature is becoming increasingly more difficult," said Martina Matzner, the general manager of Acacia Hills Farm.

With more than 30 years' experience managing mango farms in Darwin's rural area, Ms Matzner has been working on ways to adapt — including managing water more efficiently.

She is now part of a trial involving the NT Government that's growing more climate change-tolerant mangoes, which for now are being kept under wraps.

The Northern Territory's mango industry is its most valuable horticultural sector and produces two thirds of the total Australian mango crop.

The NT Government said it was working with a range of mango producers who were concerned about the impact of climate change.

"We are expected to get higher rainfall, but much more variable, and much more extreme events, and warmer temperatures," said Mila Bristow, the NT Government's director of Plant Industries.

Both Ms Matzner and the Territory Government said they were confident they would be able to innovate fast enough to keep up with some of the threats of climate changes expected until about 2090.

"I am confident we can stay ahead of temperature variability," Ms Matzner said.

"For example, we're working to understand different forms of planting the trees to make them more wind tolerant but we're at the beginning of that whole journey, so not quite there yet," Ms Matzner said.

Ms Matzner said she believed only more global efforts to stop carbon emissions rising would save her industry long term.

"We just need to accept that climate change is real, and it would be foolish not to be concerned about it, and once we can accept that, we can look at the solutions," she said.