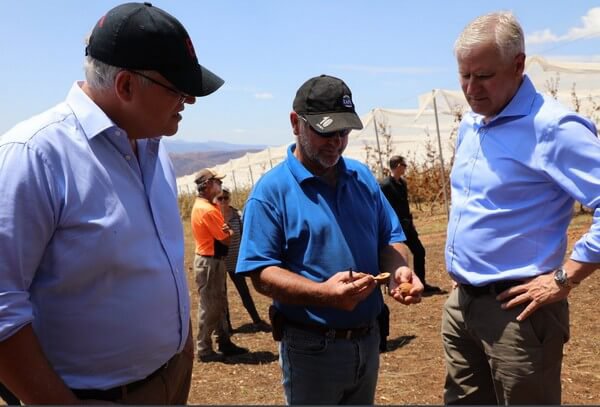 The rebuild of several of Australia’s iconic apple growing regions is urgently required and the industry continues to extensively engage with both Federal and State Governments to assist in this process.

It is estimated the fires have caused up to $74 million in damage. Much of the damage was caused by factors beyond the growers’ control, such as proximity to state pine forests.

APAL is lobbying the NSW and Federal governments for a five-year rebuilding program to provide assistance for land clearing, tree, netting, trellis and irrigation replacement, as well as orchard development costs until the trees become productive.

Prime Minister Scott Morrison and Deputy Prime Minister Michael McCormack have been among those to meet with APAL and growers, as well as the Federal Minister for Agriculture David Littleproud, Deputy NSW Premier  and Leader of the National Party John Barilaro, NSW Minister for Agriculture Adam Marshall, and numerous Federal MPs and Senators, including Federal Member for Eden Monaro Dr Mike Kelly, Federal Member for  Nicholls Damian Drum, and Senator for NSW Perin Davey. In addition, APAL continues to work closely with the National Bushfire Recovery Agency and its NSW counterpart.

The meetings have been a chance for Government and the apple industry, especially those impacted by the fires, to come together to discuss the way forward for one of Australia’s most important industries.

“The bushfires have caused a lot of damage, but there have also been hailstorms, drought and other challenges in recent years.

“A unique opportunity now exists to rebuild these areas as world leaders, proofed against environmental challenges.”