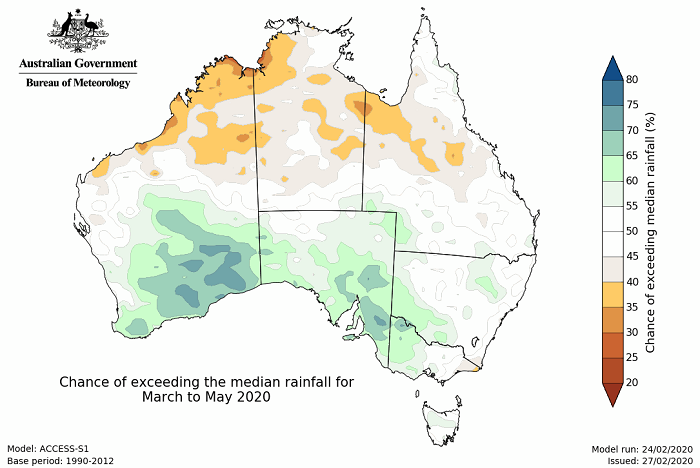 As the traumatic summer officially creeps to a close, it is with weary eyes that we look to what autumn might hold.

There is a glimmer of hope for large parts of the southern states hanging out for more rain — a 60 to 70 per cent chance of wetter-than-average conditions.

It's an especially welcome forecast for South Australia, which has largely missed out on the rain so far this year, but parts of the continent's north are expected to be dry.

The summer that was

The summer, which is longer than usual thanks to the leap year, will crawl to a close on Saturday night.

Official numbers won't be processed until then, but it will surprise few that, according to the Bureau of Meteorology, it is looking like summer 2019-20 will be in the top three years of records for daytime temperatures.

As a whole, summer was drier than average, following on from years of drought and combining with high temperatures to bring about such a horror fire season.

But there was, of course, the big change mid January, which brought flooding rain to the east.

This change was the result of two big climate drivers backing down midsummer, according to BOM senior climatologist Andrew Watkins.

"At the start of summer, we saw both a very strong positive Indian Ocean Dipole and a near-record negative Southern Annular Mode," Dr Watkins said.

"That resulted in both the warmest and driest December on record, with significant fire weather throughout many parts of the country.

"In January, we saw those two drivers return to neutral levels, plus a very late arrival of the northern monsoon, which finally brought tropical moisture to the continent."

The late monsoon has been making up for lost time; at present, widespread rainfall is forecast to accompany the uncertain path of ex-tropical cyclone Esther across the Top End.

There is even potential that this system could redevelop into a cyclone over West Australian waters in the coming days.

The autumn that will be

Luckily, beyond the horizons the oceans are now looking pretty neutral; traditionally the major climate drivers lie low during autumn, and this season they don't appear to be pushing in one direction or another.

This means it will be local conditions and individual systems that the many still waiting for rain will have to watch for.

As we have seen with the flooding in recent weeks, it doesn't take a big push from a climate driver to bring rain.

The BOM's latest tropical climate note suggests monsoon-break conditions are likely to return to northern Australia, with drier-than-average conditions forecast there for autumn.

But down south it is looking more positive; most of the country should expect neutral conditions, and some parts are likely to receive above-average rainfall, according to the outlook.

Even if it is a wet autumn, many areas still need months of above-average rainfall to relieve drought conditions.

Overnight temperatures are expected to be above average throughout.

While daytime temperatures are expected to be above average in the north, the outlook is showing no clear signal one way or the other in the south.

The BOM attributes high ocean temperatures and long-term climate change as the reasons behind this warm outlook.

And while we draw the curtain on an extreme summer, remember there are still two months of the cyclone season to play out.

The season traditionally runs from November 1 to April 30.

This year's outlook was for fewer than the average 11 cyclones in Australian waters — so far there have been six.