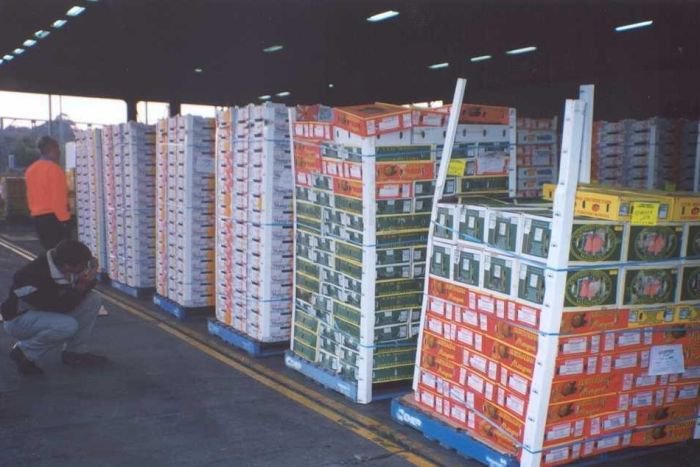 In the early 2000s, a cardboard box emerged from a workshop in the Northern Territory. It had a unique design and would go on to shape the future of Australia's fruit and vegetable industries.

One of its developers, David Hoseason-Smith, received due recognition in July, winning an innovation award at the Northern Australia Food Futures Conference in Darwin.

So how did this box story start? Mr Hoseason-Smith first went to Darwin in 1998, to take over the local manager role for packaging company Amcor. The company was supplying boxes to the emerging mango industry, but there were problems.

"The box being used at the time was not strong enough and had bottom-sag and was making the fruit flat," he said.

"By the time fruit made it all the way down to Sydney or Melbourne, there were issues.

"Every box was hand-directed as well, so if a customer wanted to do 5,000 boxes they would need a team of casual workers to come in and make those boxes."

"And to cut a long story short, we bought two machines to Darwin and developed the box here as a one-piece box with a lid on it, so that's how it started," he said.

But the Kiwi boxes struggled with the Top End conditions.

"They've got much cooler conditions in New Zealand and their box-style doesn't have to be as vigorous, so we actually had to develop a new box that was right for the Northern Territory," Mr Hoseason-Smith said.

"We got all of the packaging engineers together and redesigned the box and how it folded to make it stronger and so it could be stacked in columns on the pallet. "And then we got paper-technologists who developed what they called 'functionally coated papers', which is basically a piece of paper with a very thin plastic membrane laminated between two pieces of paper, and that paper then becomes a moisture barrier, it's a very high-tech box."

The boxes are now manufactured either overseas, or at facilities in Sydney, Adelaide and Brisbane. In the Northern Territory, the flat boxes arrive in Darwin and are put through erecting machines, which are scattered across the Top End.Mr Hoseason-Smith said from humble beginnings in Darwin, the box design is now used Australia-wide.

"The open-tray box [which we developed] is now the major box used for tray-fruit across Australia from apples to pears, plums, peaches, avocadoes and mangoes of course," he said.

"Every box in Australia now is in an open-tray box because of the work we did here in the Northern Territory".

He said the Darwin invention had brought significant benefits to the horticultural sector in northern Australia. "If it wasn't for this particular box, I don't think we'd be sending 4.8 million trays of mangoes out of the Northern Territory," he said.

"If we were using technology from years ago, every piece of fruit would be bruised or damaged and rejected in the marketplace.

"So basically it's allowed fruit to travel from here to the markets [down south], it can go anywhere around the world which has opened up markets because it allows fruit to get there in good condition."

Mr Hoseason-Smith still works in the packaging industry and says the "journey hasn't finished", with people constantly coming up with ideas to improve the paddock-to-plate process.