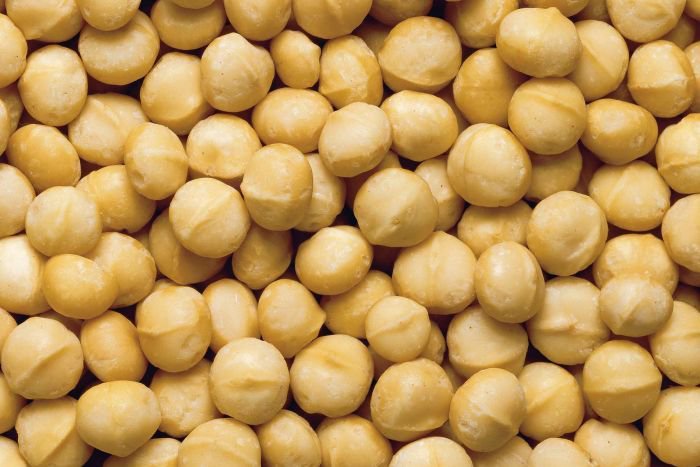 Market Development Manager Lynne Ziehlke said part of the price rise was due to growers getting paid more — and because of the rarity of the product. "In terms of tree nuts globally, macadamias [only make up] 1 to 2 per cent of global tree nut production, so there actually aren't a lot of macadamias around in the world, so that's one of the drivers," Ms Ziehlke said.

Despite the price rise, consumer demand was also growing. The industry body predicted the number of nuts that would be sold in Australia this year would beat last year's record of nearly 4,000 tonnes.

Ms Ziehlke said its popularity had been driven by health food trends. "This rise in consumer interest in plant food is so palpable and consumers are eating more whole foods … a lot of this is driven by vegans, coeliacs, and consumers looking for dairy alternatives," she said. "You have seen a lot of niche products on the Australian market in the last year or so.

"There's no doubt in my mind that there is going to be very strong growth in that space as more product becomes available."

Keep up with demand
The harvest has just begun in one of Australia's key growing areas, Bundaberg, and the national forecast is looking good. This year's crop was expected to produce 53,500 tonnes in-shell, topping the record-setting 2018 harvest.

Macadamia nut farm consultant Chris Searle has been in the industry for more than two decades and said growth was not matching national and international demand. "We can't develop new markets for the nuts that are coming on, because we don't have enough nuts now … we simply don't have enough nuts to satisfy existing customers," Mr Searle said. Mr Searle said more innovative uses of the nuts that were available was contributing to the consumer demand.

"There was a problem once upon a time with all the little bits and pieces that were created during the process and they really dragged the overall price down," he said. "Now with developing the market such as milk, there's a home for those, and they're selling them for very good prices, so that's actually brought the overall price up," Mr Searle said.

Can I have macadamia nut milk with that?
One of the first macadamia nut milks produced was by Milkadamia. Owner Morgan Roy started developing the product eight years ago before launching in 2014. The product gained momentum quickly in America, but Mr Roy said demand for the dairy alternative in Australia had only pushed forward in the last year.

Mr Roy said the introduction of other macadamia nut milk brands in Australia had grown awareness and sales. "It's still very early days … we do trade shows and events and people say, 'wow I've never heard of this, I've never seen this'," he said. "People are now more aware and more open to try these new things, and they're very excited when they realise it's an Australian-grown crop. "Out of all the dairy alternatives it's the only one that is native to Australia," Mr Roy said.

Time to get cracking
Jon Perrin is the general manager of one of the earliest established cracking facilities in the country, Macadamias Direct in northern New South Wales, which is owned by the same family group as Milkadamia, Jindilli Farms. He said while demand for the native nut had grown, the industry needed to acknowledge that the Chinese market consumed up to 40 per cent of the global crop.

"If China sneezes there could be an impact there," Mr Perrin said. "With so many trees being planted in Australia, in South Africa, in other parts of the world, and China of course, it's going to be absolutely critical that we grow consumption and pretty quickly." He said while growers could not currently keep up with demand, the industry needed to get macadamia nut products into every day consumption.

"Statistically all the numbers are showing that the global crop is going to double in the next three to five years," Mr Perrin said. "I think it's about getting it into an everyday use type sector because we need that type of growth consumption. "At the moment the supply can't keep up with demand but that supply demand curve is going to change and it's going to change rapidly, and we need to be ahead of that curve as an industry." Ms Ziehlke said one of the constraints for product development had been the lack of product available, but with supply increasing the Australian Macadamia Society expected food manufacturers to gain confidence in the nut.