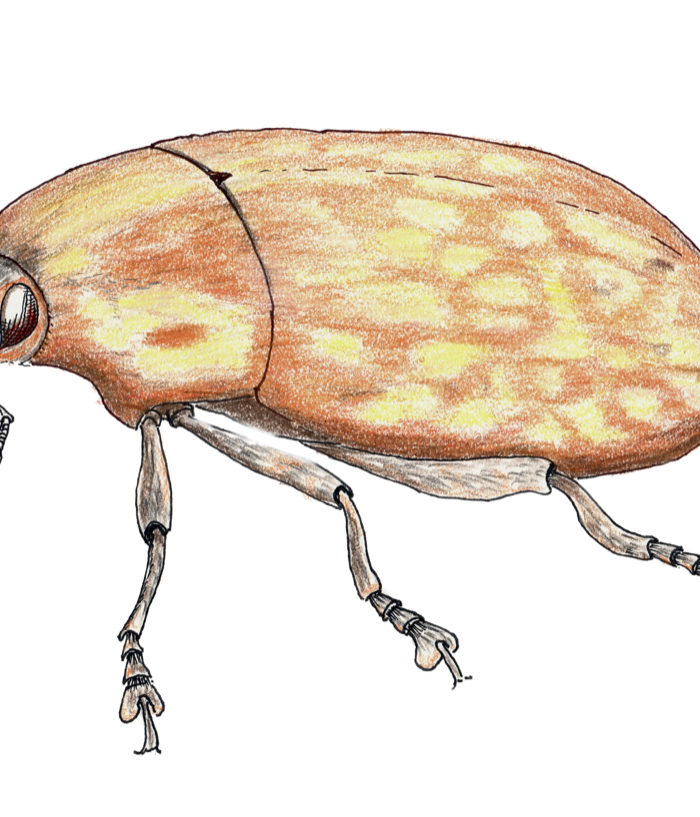 Weevils are easy to identify, but they affect so many tree crops it’s worth devoting a whole segment to them. The adult is a beetle with a nose or proboscis; the compound eyes are at the top of the proboscis and the antennae, sticking out each side just below the eyes have an ‘elbow’ and a few larger segments forming a terminal ‘club’.

The mandibles are at the end of the snout. The larva is a legless grub usually found in the root zone. It may look a bit like the six-legged beetle curl grubs covered last issue, but when you find one legless (without booze) it’s a weevil larva.

Weevil damage is fairly typical. Adults usually hide in the mulch or lower bark and move upwards as soon as the sun goes down. When they get to the leaves, with a set of legs each side of a leaf, they begin munching on the edge as far down as their snout goes, then they walk forward and do it again. The result is a scalloping around the margin of the leaves.

There are dozens of weevil species attacking many crops (including trees). Many pest species get different common names based on the chosen, or available, crop. For instance, ‘vine’ weevils also attack plants other than grape vines… including weeds and other vegetation beneath and beside the crop and are then called ‘garden’ or even ‘leaf’ weevils.

If you’re in the subtropics/tropics and also grow bananas (which proper Tree Crop readers quickly say are not a tree), most of the damage is from the larvae which the beetle lays in or on the corm. Enough of them can weaken the lower stem and a strong wind can blow it over.

There is a mango seed weevil, and it lays an egg on a young fruit. The hatching larva bores directly into the seed while tiny; the skin and flesh repair without indication of the destruction going on in the seed.

Grow citrus? You also have a leaf eating weevil making typical notches around the leaves. And a citrus root weevil. Is it the same weevil named differently because of its feeding site?

How about apples or pears? Your job is to look out for elephant weevils (a common name for a snouted weevil) and the Fullers rose weevil that doesn’t stick to eating roses. Again, notched/scalloped leaves are the common indicator.

State government DPI and agriculture departments usually list weevils as minor pests. In the big scheme of things that is relatively true, but if the weevils are attacking your tree crop, you should know enough about them to begin to control them.

Adult sizes vary from about 5–7mm for the various leaf/vine/garden/etc weevils, 10mm for the mango seed weevil and 12–15mm for the banana weevil. Larva sizes vary in relationship to the adult size.

The length of their life cycles also varies but that is also a factor of climate; in the tropics there is no winter (compared to the puffer-jacket climates in Tassie and the SE State’s highlands) but ‘winter’ in the tropics is the ‘dry’ and as most weevil larvae eat in the soil, the lessened soil moisture can have a slowing effect.

Weevil eggs are generally laid in small batches in leaf litter or debris under the host plant, or singly on banana corms or the actual roots of trees. A week or so later, depending on climate and season, they hatch and begin feeding on living roots. The larvae have chewing mouthparts, and, without legs, their locomotion is by wriggling. They know how earthworms feel but would be envious of the earthworm’s speed through the soil… if they could only see.

Larvae can go through about 10 moults while growing up and their shed skins, including head capsule, littered behind them (food for other little organisms). The pupal stage in insects is always an event of enormous change. The legless eating-machine weevil grub, during this 3–10-week stage, finally pupates and withdraws inside its larval skin and rebuilds itself with legs, wings, eyes, antennae, reproductive organs and a digestive system more attuned to eating green leaves with a new set of dentures.

I think their evolution is wasting a lot of time continuing to build wings they hardly, if ever, use to fly, however the hard forewing does give protection.

If you disturb weevils feeding up in the foliage, they just drop off; there’s no attempt to open and flutter their wings as they pinball to earth then pretend they are dead with their legs tucked up in their version of our foetal position. (They didn’t develop eyelids so they can’t give the full corpse impression). Maybe they really are stunned – after all, a fall of 1.5 metres for a 10mm weevil is 150 times its body length; how would we be feeling after falling 225 metres?

It takes many years for a weevil problem to become significant. The action begins around the margins of your crop. Your first sign will probably be noticing the notched leaves. It’s unlikely you’ll see the adult weevil unless you go out at night. They hide in loose bark, crevices at branch junctions, bunched fruit, or most often in the soil/mulch at the base of your trees during the day.

Because they walk rather than fly, the spread is slow. If the branches of your trees intermingle, they can move from tree to tree by walking. You can of course speed it up for them by scarifying the soil under your trees and dragging larvae and eggs in the mulch and leaf litter further into your crop.

Your insecticidal options are similar to most insect pests: the contact sprays will need to be applied in the evenings (the later the better, to give them time to get from soil to well up in the tree). Because they are feeding on the edges of the leaves, they will be easily hit with a droplet. Systemic insecticides which translocate trough the sapstream will do the job providing you are not getting close to the withholding period deadline.

Application of residual pesticides to the soil is effective; chlorpryrifos used to be the go but is now withdrawn from many situations. Residual soil insecticides are worth your evaluation. Beneficial wasps are sleeping while the weevils are moonlighting, but parasitic nematodes can be used against the larvae.

Once upon a time a cotton wool-like fabric wrapped around the trunk just below the first branch entangled climbing weevils. New, synthetic materials last longer and could make a comeback, but don’t hold your breath.