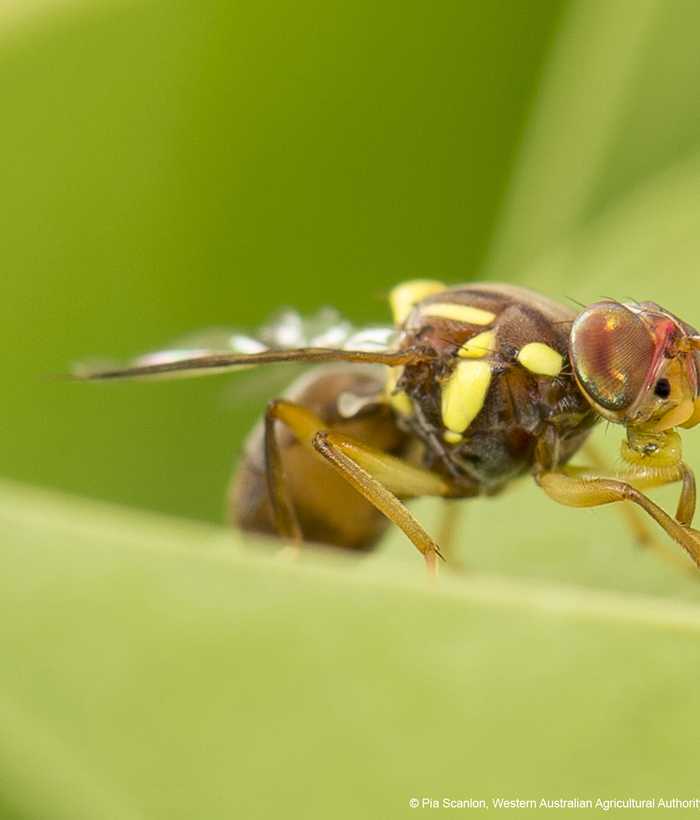 Queensland Fruit Fly (Qfly) is one of Australia’s most destructive horticultural pests. As part of the effort to combat this pest, research is being undertaken to refine and improve the Sterile Insect Technique (SIT).

SIT is an environmentally friendly technique involving the deliberate rearing, sterilisation, and mass release of sterile insects over a wide area which then mate with their wild counterparts. This in turn impacts reproduction, causing the population to crash.

But not being able to accurately identify sterile flies from wild flies can impact monitoring and response operations and potentially impact trade efforts, so how do you tell the good flies from the bad ones?

With support from Hort Innovation, a Macquarie University research team led by Dr Bishwo Mainali, and assisted by Prof Phil Taylor and Dr’s Anita Andrew, and Polychronis Rempoulakis have recently investigated a method to do just that.

Flies are sterilised at the pupal stage and are dyed with a fluorescent dye before being shipped to a rear-out centre close to their release area. When the fly emerges from its pupa, traces of the dye remain permanently on its head.

Under a microscope the dye can be identified, but in some cases, this can be difficult. More dye is not the answer as this can reduce performance and the rate of successful emergence, as well as increasing the chance of the dye being transferred to wild flies.

Whilst dye is perfectly suitable in most cases, another method is needed as an alternative to confirm any unclear cases, and so Dr Mainali explored the use of stable isotopes to aid in identification in particular Carbon 13C and Nitrogen 15N.

Stable isotopes are naturally occurring forms of the same element. They differ in their numbers of neutrons, and hence mass, and do not decay into other elements. Although rare, stable isotopes can be found everywhere, with their quantity influenced by a range of ecological processes.

Dr Mainali said the ratios in which different stable isotopes are present form a signature of that environment. This environmental signature is incorporated into plants and in turn insects and animals via consumption as food, which can then be used to indicate the recent origins of that plant insect or animal. This is distinct from DNA analysis which can be used to identify common ancestry but not immediate geographic origins.

A key difference between wild and lab raised flies lies in their diet. Qflies raised for SIT in Australia are commonly fed on diets which use sugar sourced from sugar cane, following a C4 photosynthetic pathway. In the wild however, the Qflies dietary source of sugar is fruits and vegetables, which predominantly follow the C3 photosynthetic pathway.

Dr Mainali and the team undertook an analysis of wild and lab bred Qfly and found that the two different diets resulted in the Qflies having different stable carbon isotope profiles, with the wild Qflies’ 13C values comparatively less than the sterile Qflies. This difference is distinctive enough to reliably discern if a Qfly was sterile or a wild type.

This positive result establishes an accurate and effective method of identifying sterile Qfly from their wild counterparts. Having an alternative identification method to validate sterile flies is an important safeguard especially when considering situations such as pest free areas.