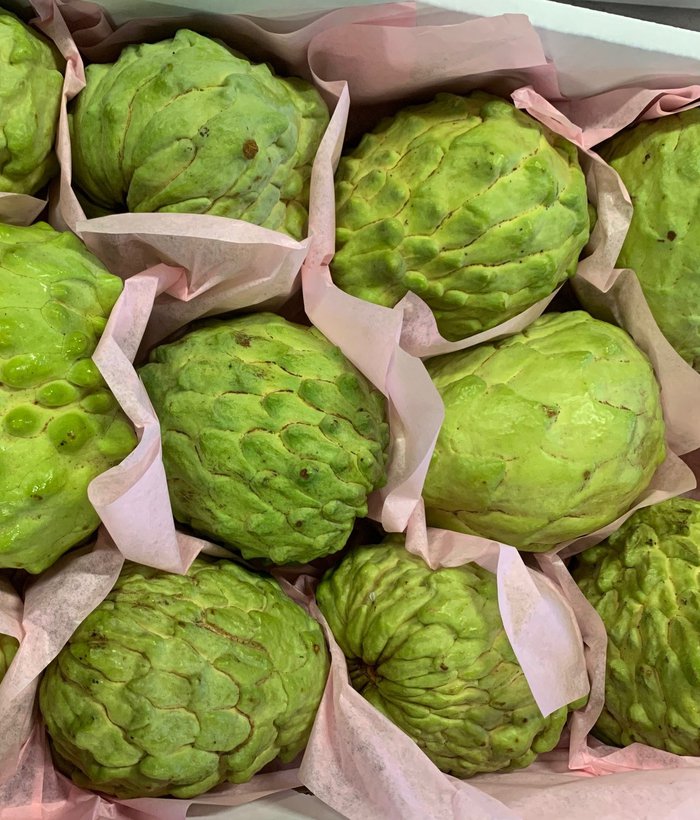 In 1992 Wendy and John Graham bought a property in Wollongbar on the far north coast of NSW with a 5-acre orchard including 400 mature African Pride custard apple trees. With no prior expertise in farming they began a 29-year journey to grow their farm to 800 trees with the original African Prides and the subsequent addition of 500 KJ Pinks in vase.

A nearby TAFE afforded access to soil management courses where they learnt to focus on understanding the importance of soil microbial and fungal activity in tree health and disease resistance as the foundation of a profitable, productive orchard.

Soil biological activity is enhanced by the annual application of nutrient compost and by growing ground covers such as nitrogen-fixing legumes, clovers and Pinto peanut. This adds diversity to the orchard floor, promoting moisture retention and nutrient cycling and stopping erosive loss of topsoil.

Interrows are allowed to flower and seed to provide food sources for beneficial insects and pollinators. Flowering windbreaks were also added to promote this diversity.

Mealy bug and soft scale have been well controlled with the regular release of Cryptolaemus Montrouzier Australian native beetle larvae. Aphytis wasp release controls armoured scale with the regular release of green lacewings to act as a generalised predator of aphids, mealy bugs and scale insects. Strategically introducing these has meant that sooty mould on fruit has been kept at a minimum in the orchard and thus ant control has been unnecessary.

Fruit fly fruit damage is less in NSW than in Qld but requires orchard-wide year-round baiting for male fruit fly using continuously monitored traps. A localised population increase when the trees are fruiting will result in weekly baiting for the female fruit fly.

Fruit spotting bug (FSB) control is a major problem. Anastatus wasp, a naturally occurring egg parasitoid of FSB, is released regularly to boost populations. With this strategy, FSB fruit damage has been contained to localised clusters with most of the trees being free of FSB. Importantly, since introducing this regime of biological pest management it has not been necessary to treat any outbreaks with pesticides in over 20 years.

Generic orchard management has entailed pruning the trees to allow good air flow both around and under the canopies, minimal below canopy ground disturbance during fruit maturation to reduce fungal spore disturbance into the atmosphere and good orchard hygiene. Copper sprays were used initially but were suspended when soil copper levels rose on soil testing, and it was recognised that this would directly affect subsoil fungal health.

Close, continuous monitoring of the orchard for fungal disease is a continual issue with the currently changing weather patterns, especially after a prolonged wet phase. A fungal outbreak in 2020 in one block was controlled with a Cabrio (stobilurin fungicide) spray so in 2021 a single Cabrio spray was administered during fruit maturation with good effect.

Over the years, with a focus on biological orchard health, the Grahams have seen their original African Pride trees reinvigorated and continue to be productive with good quality fruit and their new blocks progress well. The orchard has become more resilient to climatic extremes.