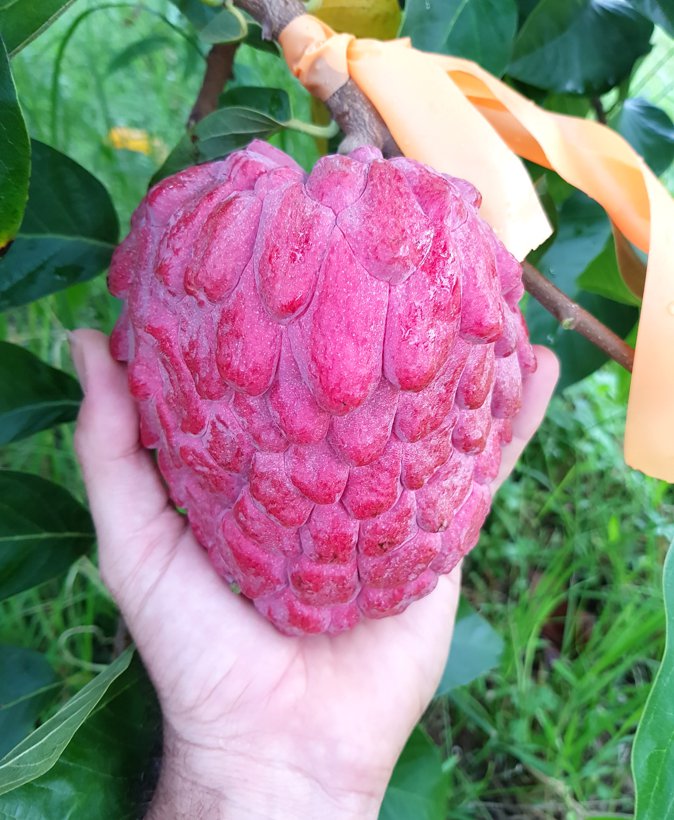 Originally from South America, the Australian custard apple is a locally developed hybrid of the sugar apple (Annona squamosa) and the cherimoya (Annona cherimola).

Grown on Australia’s eastern coast from the tropics of north Queensland to the sub-tropics of New South Wales, Australian custard apples are quite unique. Harvest is from February to August and the fruit tastes sublime, according to Custard Apples Australia president, Daniel Jackson.

“The sweet, creamy, flavours just melt in your mouth, and the taste of the tropics lingers. If you haven’t tried the fruit before, you’ve got to give it a go.You won’t be disappointed,” Mr Jackson said.

Demand for this fruit is steadily growing. Social media platforms have helped spread awareness and educate consumers on how the fruit is grown, when to eat it and how to eat it.

“Traditionally, the Asian markets and older demographic consumed custard apples. Almost everyone in the tropics used to have a tree in their backyard years ago. But the more consumers learn about this exquisite jewel of the tropics, our target markets will broaden,” Mr Jackson said.

“Now is the time to let everyone into a little secret. Custard apples are not apples, as in the juicy, crunchy type of apple. Remove the fruit from the fridge and wait a few days until the fruit softens, then it is ready eat,” Mr Jackson said.

Horticulture industry numbers are increasing too, as new farmers make the welcomed move into the custard apple arena.

“We have a really great bunch of growers in the industry comprising over 130 farms. Orchards numbers range from 100 trees to over 2000 trees, with two main commercial varieties grown – Pinks Mammoth and African Pride,” Mr Jackson said.

Life in the custard apple world is about to get a lot more colourful. Two new players are waiting in the wings, both born and bred on the Sunshine Coast. One variety produces red-skinned fruit, while the other showcases a pink/orange-skinned fruit.

Department of Agriculture and Fisheries (DAF) scientist, Grant Bignell and field operations manager Dave Bruun at Queensland’s Maroochy Research Facility are at the forefront of Australia’s custard apple breeding program – one of the world’s largest.

“We’ve been trialling new custard apple varieties for the past 25 years and have seen our fair share of different shapes, colours and tastes,” Mr Bignell said.

“Previously some varieties failed to make the grade, as the fruit wasn’t a great shape or didn’t taste pleasant. Nowadays, we are regularly developing fruit with good taste and good characteristics.”

However, what is especially exciting for the breeding program are the trials being conducted with the red-skinned variety which is expected to be a hit with the Asian markets.

DAF’s Dave Brunn said the red-skinned variety is showing great promise. The fruit is differentiated in colour, and fruit size has been good – with the average weight about 600 grams.

“Our aim is to get the taste right. At present, we feel the taste is comparable to other varieties on the market. Another bonus for this variety is that the fruit could mature a little bit later in the season,” Mr Bruun said.

It takes years of hard work and a good measure of passion to develop a robust breeding program. Unfavourable seasons, unpredictable weather events or pest infestations can all impede the progress.

“As the breeding still requires a little more fine-tuning, we will continue to evaluate and test new selections,” Mr Bignell said. “On-farm testing of the red-skinned variety is still in the early stages, so commercialisation is still 2-5 years away.”

Three new green-skinned varieties are set to be released in the next two or three years, which will offer commercial growers a greater range.Two of these new selections are very similar to currently available varieties but offer improvements in flavour and fruit size. The third green-skinned selection offers a very different taste that has proven popular with consumers who don’t like the flavour of current varieties.

For Yanalla Farms tropical fruit growers, Robert and Karen Martin, their story is quite remarkable. Over 23 years ago, the PinksBlush custard apple was found growing naturally on a single branch of another custard apple tree on their Glass House Mountains property.

“My father-in-law noticed fruit dropping on the ground in September. This was most unusual because his custard apple harvest usually finished in July,” Mrs Martin said.

“Initially he did not bother taking it further, until my husband pestered him to graft some trees. Second, third and fourth generation trees are maintaining the same distinctive characteristics as the mother-stock. That’s proof enough for us this variety is a winner,” she said.

The fruit of PinksBlush grows over winter when pest pressure is minimal. Harvest commences in September – at a time when all other varieties are nearing the end of their pick. So, for the next couple of months or so, the Martins’ are the only growers in the world harvesting this fruit.

The extent and depth of colour on the skin will depend on the amount of sunlight each piece of ripening fruit receives. Generally, a blush of pastel colours will appear on the shoulder of the fruit – hence the name PinksBlush.

“You get quite a nice surprise when picking. The fruit looks really beautiful. You never know what the colour mix will be, and it tastes great too. It’s the perfect combo,” Mrs Martin said.

The Martins’ hold the plant breeder rights for this variety and intend releasing PinksBlush trees to commercial growers’ soon, through a royalties-based business model. But this rollout has been hampered by a shortage of rootstock.

“For some time now, the nurseries just haven’t had the quantity of rootstock we need. Rather than waiting any longer and jeopardise the expansion of our own orchards, we decided to grow our own rootstock,” Mrs Martin said.

“It was a bit of trial and error, but I’ve germinated Cherimoya rootstock seeds for the past three years’ with great success. We grafted the plants with PinksBlush scion wood and trees are thriving. In the next year or so, our own orchards will be fully planted out and then we can concentrate on growing grafted plants for commercial release,” she said.