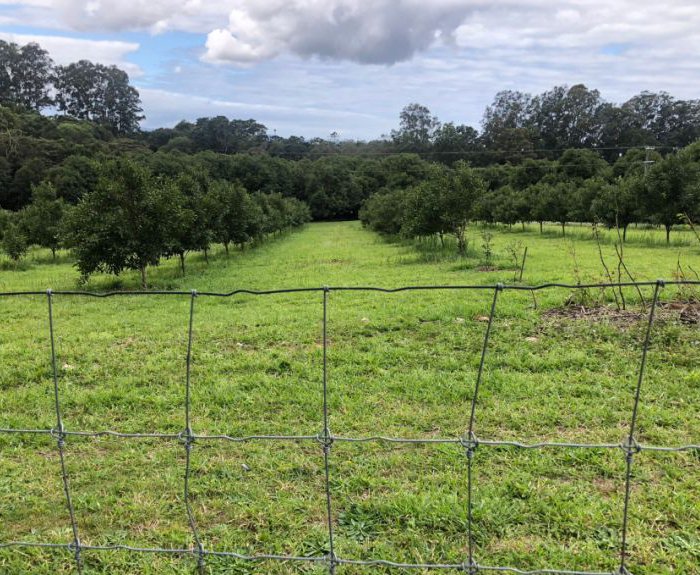 Kin Kin farmer Bruce Maguire was losing up to $20,000 of his annual macadamia harvest to midnight marauders — but it was a threat to his family that convinced him to take the plunge to fence against feral pigs.

"We had an incident here where my son-in-law was walking through the orchard with his six-month old baby and a big pig charged him. It was pretty scary for him.

"I've seen pictures of pigs that have been caught that have weighed up to 160 kilograms, I mean that is a massively strong dangerous animal."

Mr Maguire spent around $20,000 personally installing 1.8 kilometres of an Australian-made wire fencing system that has successfully kept wild pigs out all year.

"I felt it was the only solution that would really give me some comfort because you're worrying all the time," Mr Maguire said.

It is estimated that up to 24 million feral pigs cost Australian agriculture $100 million every year.

Respected hunter David Hard spent tens of thousands of dollars on thermal imaging scopes for his firearms, consulting with neighbours before targeting problem pigs for macadamia farmers.
He has taken out up to six in one minute at night.

But an increasing number of growers frustrated by current control methods, have found an investment in exclusion fencing can recoup its cost in saved crops within one to two years.

"It is the best thing I've done for the orchard for a long time, it gives me a peace of mind, it is paying for itself," Mr Maguire said.

"I've had sleepless nights when the pigs were around. You could hear them crunching in the orchard at night."

The destructive animals have dug a string of large holes in the bush outside the Maguire's fence.

But without the fence, the pigs eat the macadamia husks off the orchard floor, where they fall when they are ripe and are later harvested by machines.

The other issue when the pigs get into the orchard is the ruts they dig, which hamper the harvesters picking up nuts from the ground, and the pigs can potentially contaminate the valuable export crop.

"Pig exclusion fencing is really the only option in terms of keeping those animals completely out of the orchard and guaranteeing food safety — more and more growers are making that leap," Suncoast Gold Macadamias technical officer, Megan Boote said.

The processing company sources nuts from more than 90 growers in Queensland and New South Wales.

"I talk to a lot of growers in all the regions, and I am getting more reports from growers, where they've rarely ever had pig problems and then all of a sudden the pigs are there," Ms Boote said.

"The prices for macadamias are at an all-time high at the moment. It's been estimated that one big pig can consume up to, maybe, 60 kilograms in a night and the macadamias are worth an average of about $6 a kilogram, so the costs really start adding up."

It is the responsibility of individual landowners to control feral pigs on their properties, but councils provide varying levels of support.

"I'm not trying to point the finger at any particular agency," Mr Burnett said.

"However, the largest landholder of feral-pig affected lands is the state of Queensland, and it would be good to see the department take a more proactive approach and show a little bit more leadership here.

"Councils have done quite a good job to the extent that they are able to."

A Queensland Parks and Wildlife Service spokesperson said the department is spending more than $1 million in 2019-20 to reduce the impacts of feral pigs, as part of the agency's overall integrated pest management programs.