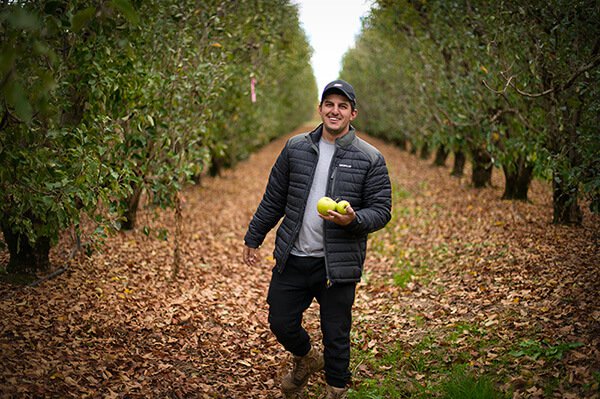 “We chose to trial a section of our new Pink Lady planting with 900 Ellepots alongside bare rooted trees on identical M26 rootstock and gave them the same fertiliser and irrigation treatments throughout the growing season,” said Andrew Sibio.

“Prior to planting, the bare rooted trees didn’t look as healthy as the ones in the paper membrane and the trunks of the Ellepot trees were fractionally thicker, so it looks as if they grow better in a pot system.

Once in the ground, the potted trees seemed to be a little slower to get going, but Mr Sibio said by January they were growing better and they didn’t appear to suffer any transplant shock.

“Then it was obvious they had a better engine driving growth as they filled the trellis space quicker than the bare rooted and looking at the block, you could actually see that they were performing slightly better.”

The Ellepot plugs were harder to handle, he said, and needed to be carefully stacked for transport, whereas the bare rooted trees could be piled onto a trailer and more could be physically transported at a time.

However the plugs didn’t need to be stored in a cool room and held moisture well while they were in the paddock waiting to be planted, while it was necessary to ensure the bare rooted trees didn’t dry out.

“We would certainly look at using the Ellepots again because they were better trees,” said Mr Sibio.

“There is an advantage to be able to plant them at any time too, rather than waiting until trees are in dormancy.”