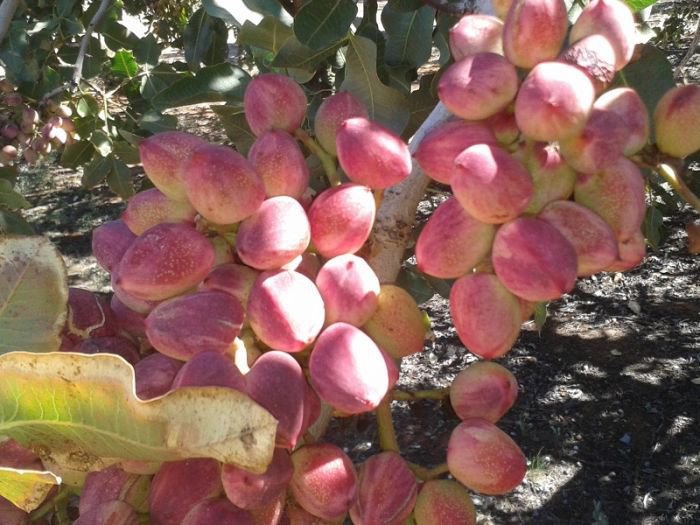 The majority of the nation's pistachio crop is grown along the Murray River by about 20 growers.

"In 2018 we had a record crop and in 2019 we had the inevitable off-crop, significantly less than the previous crop.

"This year the total Australian crop will be about 1,800 tonnes and that will be largely consumed in the domestic market."

Farmer Martin Simpfendorfer is one of the longest standing pistachio growers in South Australia's Riverland region.

He has been growing pistachios since the 1970s and has seen the industry develop over the decades.

"We've grown up with change all the time, from not knowing how to grow pistachios in the first place," Mr Simpfendorfer said.

"With the help of the Loxton Research Centre the manager there helped us to get the right variety and got the orchard going.

His son James Simpfendorfer said they saw a reasonable crop come off their trees this year and weather conditions were great.

"Pistachios are a very desert-suited plant, so they don't mind the heat at all — in fact if it is hot and dry in summer it's ideal because any rain during spring and summer can cause diseases, and they like a good cold winter," he said.

Struggling to meet demand
Despite expanding their orchard over the past years, the Simpfendorfers have not been able to keep up with rapidly rising demand for pistachios.

"We never met local demand … about half of the nuts sold in Australia are imported," James Simpfendorfer said.
He believed awareness of pistachios' health benefits has led the increasing demand.

"Pistachios are one of the least oily nuts that you can get but they've got a good range of vitamins and minerals."

Jay Ruediger has been growing pistachios at his orchard in Renmark, SA and said he was developing another 100 acres of his farm to meet the demand.

"People know more about pistachio nuts now through cooking shows and advertisement; they are using a lot more pistachios in recipes and cooking so everyone is aware of it."

"There is a giant body of science that has accumulated over the last 20 years which describes nuts as a true superfood," he said.
"Pistachios come with a natural open split which makes it really easy for consumers to eat because you don't need a nut cracker — you just need your fingers."

Growers' challenges
As the pistachio nut has gained popularity many growers have started to expand their orchards and some new growers entered the industry, but growing nut-bearing trees does come with challenges.

Mr Joyce said pistachio farmers had to be very patient. "Pistachios take the longest of all of the nuts to come into production," he said.

"You will not see any crop until year six and then you might break even that year, so you won't see a return on your investment until year seven.

"So people need have deep pockets and they need another source of income for the seven years it takes to establish the trees."