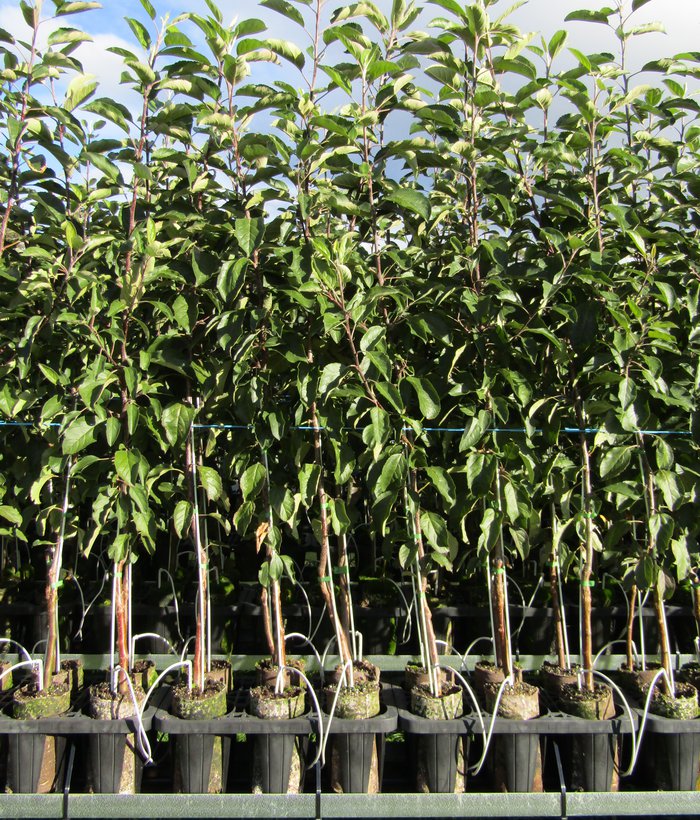 Twin Rivers Nursery in the Huon Valley in Tasmania is now growing all of its apple and cherry trees in the world-renowned Ellepot growing system.

“For those who are not aware of this system, the trees are grown in 120mm x 200mm round propagation plugs made up of a mixture of peat, perlite and steam-treated wood waste and wrapped in ‘paper’ – similar in appearance to teabags,” says Twin Rivers Nursery senior agronomist/nursery manager Peter Morrison.

“The trees are full size when planted out into the orchard and still in the plugs they were grown in. This means no transplant shock and you can plant them pretty much any time of the year.

“In the nursery they are grown in ‘air pruning’ trays so that there is absolutely no root circling, which has been a huge downside to growing trees in pots in the past,” he said. “We have a totally automated hydroponic irrigation system to irrigate them that utilises electronic scales to measure the moisture level in the pots.”

Mr Morrison said Twin Rivers had gone down this track for several reasons.

“The first of these is that we – along with a lot of tree nurseries – are running out of fresh ground to plant nursery stock into. We have been fumigating our nursery soil for nearly ten years now and although we are still growing very nice trees in the fumigated soil, we believe that it is not sustainable in the long term and not where we want to be.

“The second reason is that we have made our nursery much more worker-friendly by putting our trays up on a bench at waist height. This makes any work needing to be done on the trees much more efficient and enjoyable for workers to do.

“The third reason is that there is an increasing amount of evidence that the trees in the Ellepots take off much faster and grow more in the first growing season than bare-rooted trees. This is due to the reduction in transplant shock and having far more small fibrous roots within the pot ready to grow into the new soil once planted.

“And last but not least, we have been able to utilise a piece of ground that was useless for anything else but a bit of rough pasture and use it for a high production nursery crop and graze our lambs underneath the benches as well.”