The apple drone Is finally here 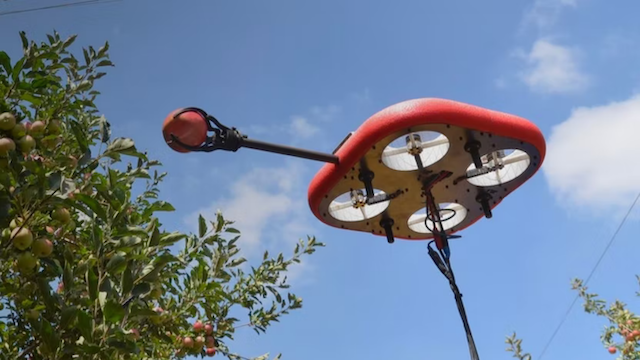 Even without an ongoing pandemic disrupting supply chains and making it an even bigger challenge to hire seasonal labour, being a farmer is hard work, especially around harvest time. A company called Tevel Aerobatics Technologies believes it’s come up with a better harvesting solution for fruit farmers with the apple drone.

It’s not a drone from that company making iPhones and iPads, but a flying tethered quadcopter with an outstretched arm attached that can intelligently target, grab, and pick apples off a tree, before dropping them onto a collection device. The solution is far from the first time that harvesting fruits and vegetables on a farm has been automated through the use of intelligent machinery and even robots, but fruits like apples often benefit from human harvesters who can visually inspect when it’s ripe enough to pick while handling it with the necessary care to not cause bruising or other damage.

Earlier approaches to automating apple picking have relied on highly-articulated robotic arms scanning trees for ripe fruit, but there are limitations to that approach, including how far the arm can reach, and how many apples it can pick in a given time. As over-the-top as Tevel’s solution appears to be, the idea of using multiple drones at the same time tethered to a central machine has several advantages. As the machine slowly rolls through an apple orchard multiple drones delicately pluck apples off several trees at the same time using suction grippers, and because they don’t have to travel very far, a tether can be used to provide unlimited power to each drone.

Each drone appears to be equipped with sensors and cameras for not only determining if a piece of fruit is ready to be picked but for knowing where to drop them using QR codes for targeting so the machine can collect all the fruit into a single container. Tevel promises the progress of the machines can be monitored remotely through the use of GPS and mobile apps, and they can operate 24 hours a day, or at least until the central machine runs out of power or fuel.

Tevel’s business plan seems to be geared towards renting these machines out to farmers as needed at harvest time because buying them outright would likely be prohibitively expensive, but on its website, it promotes the system as still being cheaper and more efficient than hiring temporary labour for the job. It also doesn’t seem like the machines are available for rent just yet, as Tevel’s website also promises that pilot programs will soon be conducted in countries like Spain, Italy, and the US at farms over 100 hectares in size.