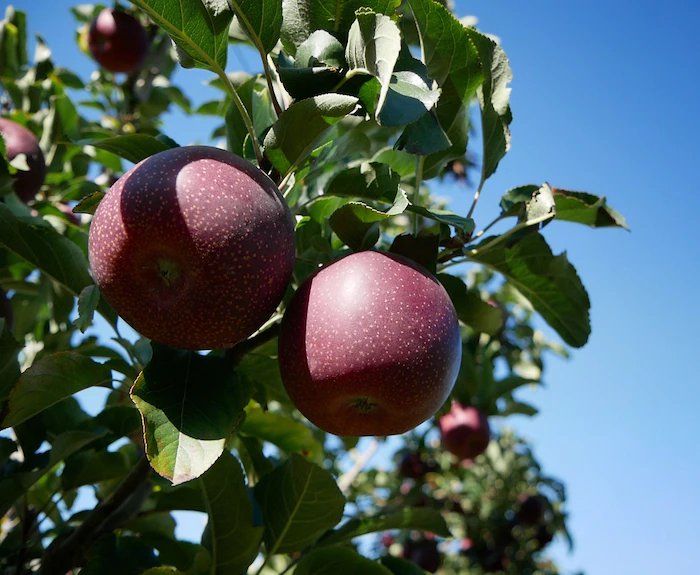 Production of the Bravo apple, a new Australian variety famous for its dark burgundy skin and sweet flesh, is tipped to jump one million kilograms on last year.

But industry players say the variety still has a long way to go in reaching longer-term production targets of around 50,000 tonnes per year by 2035.

About 3000 tonnes of first-grade fruit will be branded and sold on supermarket shelves under the Bravo label in 2021 — about 45 per cent more than the previous season as plantings grow and trees mature.

"I would say at this point we're at our lowest point of production," he said.

"We hope to increase that significantly over the next two decades. We'd aim for about 50,000 tonnes of commercial production by 2035.

"There's more work to be done in terms of meeting that final target. We need to get commercial, large scale growers invested into the variety, which we feel is looking positive."

The WA government, which owns the variety, recently lowered colour specifications for first rate fruit amid concerns from growers that too much product was going to waste.

Mr Engelbrecht said the changes would likely amount to 5-10 per cent increase in pack-out rates this season compared to 2020.

"There's been a positive response to grower consultation. The initial specifications, while ideal, didn't allow growers to make a viable return on the variety," he said. "Now the revised specs will allow growers to get more back without impacting eating quality to the consumer.

"It will give growers far more confidence in the variety longer term. Anything which improves the growers' bottom line and encourages them to reinvest and plant more of it and help to service export markets."

Total production is expected to reach between 4000-4500 tonnes this year, meaning around a quarter would not meet first grade specifications.

Under the changes, there are also more allowable uses for second grade fruit to be sold as Bravo.

"In previous seasons we've had to limit that to the general public, so food processors and mining camps – non-retail and non-metro," he said.

"This season we have approval to sell them into retail in metro, provided it's in a pre-pack form if its going into the same store as loose Bravo.

"This year there's been a significant increase from both a specifications point of view but also from the allowable uses on those specifications for both premium and class two fruit."

He said despite teething issues, he was becoming more satisfied with the variety each season.

"I think getting the hang of growing it will be the secret," he said.

"As the apple progresses I'm becoming a fan and I'm all for planting more.

"The price premium is good, but there could be improvement in reducing costs to get them into the carton which I think we have to do."

"This year we're hoping to add Indonesia with the first trial shipments happening later this year … with more shipments to the Gulf region, particularly Kuwait, Saudi Arabia, and Bahrain," he said.

Mr Engelbrecht said about 15 per cent of this year's crop would be exported but was a growing proportion of the market.

"Export has increased year-on-year by about three-fold so it still represents quite a low percentage of our total split, but the increase has been quite aggressive over the last three years," he said.

"This is our sixth commercial season. It's only now that we're starting to get enough volumes for supermarkets overseas to make an arranged offering and to get traction on it."