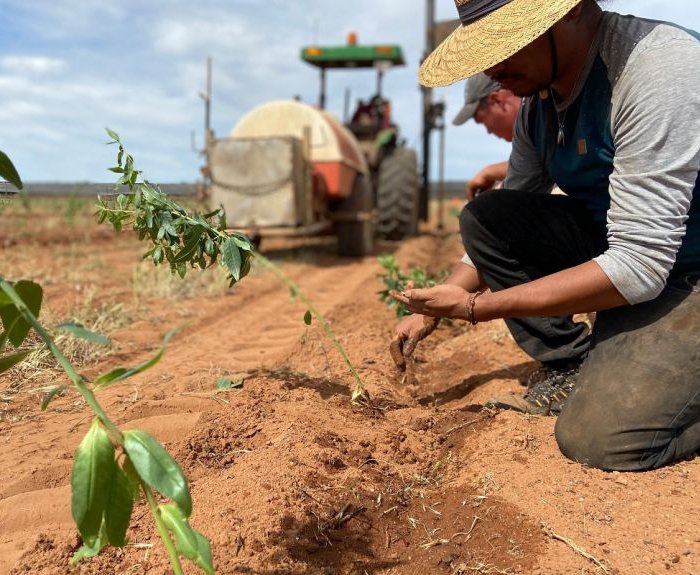 Almond trees rely on billions of bees each year to set fruit but, with fears of a global decline in bee colonies rising, scientists are finding solutions to make the trees less dependent on mother nature.

Almond trees are not wind-pollinated easily, so bees are required to pollinate and produce nuts efficiently.

New data from tertiary trials collected at three sites along the River Murray in South Australia and Victoria look promising.

Michelle Wirthensohn, senior research fellow at the University of Adelaide, leads the national breeding program and said data showed some of the new self-fertile varieties were producing 60 per cent better than nonpareil varieties — the benchmark variety for the Australian industry.

"Because our trees are 60 per cent better fruit yield than the standard variety on the same amount of water, it means that they are more water-use efficient.

"So, for the same megalitre of water they are producing more kilos, so that's the efficiency we are gaining."

Besides water savings, the research team has proven, the self-fertile trees can set fruit without bees, which could come in handy for growers in the future.

"The number one benefit is, if the bees aren't flying because of bad weather or potentially in the future if varroa mite comes into Australia and decimates our hives, then the self-fertile tree will set fruit without bees," Ms Wirthensohn said.

Almonds have become one of the most sought-after health products in the past decade, and Industry Development Officer for the Almond Board of Australia Joshua Fielke said he didn't believe demand would be slowing down anytime soon.

"Almonds are a high source of protein and a real quality product, I don't see demand," Mr Fielke said.

But the 15-fold increase of planting area in the past two decades meant beekeepers somehow had to match the demand for pollination with more hives.

The Almond Board of Australia's data shows the industry currently uses about 230,000 hives for pollination. This figure is rising quickly with new orchards coming into full production. Riverland based beekeeper Rob Marchant said, at present, they just could not match the demand for bees.

"All the plantings that have gone in, in the last few years, they need at least another 10,000 hives," he said. While the industry is scrambling to recover from devastating drought and bushfires, destroying thousands of hives in the past years, Mr Marchant is battling difficult seasonal conditions.

"The autumns are a lot harder and tougher than they used to be. We are have to do a lot more feeding of sugar syrup and different types of pollen supplements to get our bees up to standard that almond growers require."

He believes the self-fertile almond trees wouldn't have a negative impact on the beekeeping industry in the next few decades.

"I don't think they will affect us as much not in my lifetime because there are too many trees in the ground that require bees."

Since the commercial release of four self-fertile varieties bred by the University of Adelaide's team in 2016, growers like Brendan Sidhu, chief executive of Century Orchards in Loxton, have started cultivating them. He believes lower bee density could be an advantage and cut costs on pollination services.

"I think the new self-fertile varieties will make our industry a lot more sustainable long-term, lower inputs, higher yields, lower bee numbers is what we will need," Mr Sidhu said.

"What we found with these new varieties is that they have a much better seal than our nonpareil. So we are not seeing any insect damage in them at all. The insects can't get into them, that's a big plus for us."

While disease resistance has been one of the aims in the initial trials, Ms Wirthensohn has been working on new crossings to further improve the varieties.

Almost 4500 new trees have been planted in a new trial this month with the aim to combat some of the biggest disease — hull rot and bacterial spot disease — which cost the industry millions of dollars in production losses each year.