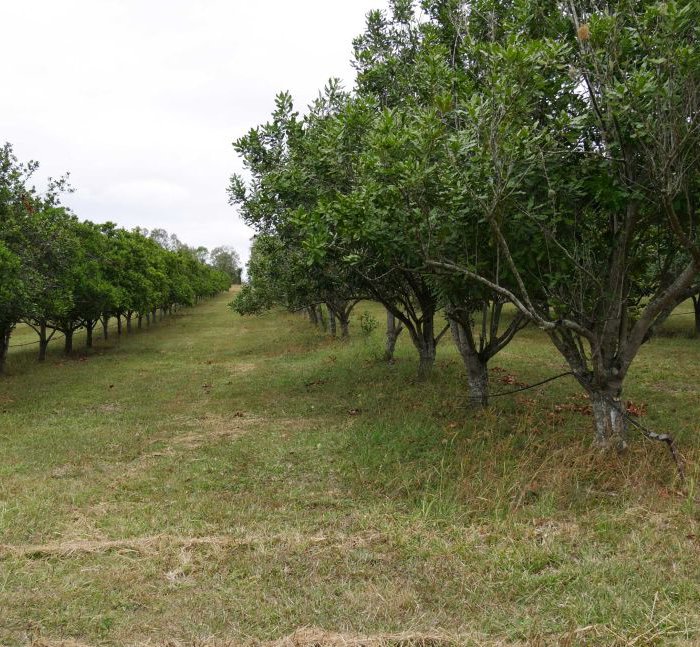 A Wide Bay macadamia farmer has credited an ancient farming method hailing from Korea for a large increase in crop yield.

Her interest in 'Korean natural farming' was piqued after it was mentioned to her by a teacher in an agricultural TAFE course.

Ms Rose said after taking over the farm, converting it to be certified organic and using the technique she saw dramatic changes, even during the drought.

"The year of takeover was only three and a half tonnes, then the first year of my ownership was 5.6 [tonne] and then the second year of ownership that will be another 25 per cent [increase] estimated."

What is Korean natural farming?

It boils down to improving the microbiology in the soil using indigenous microorganisms.

Kate Rose said it was important to get the right balance of bacteria, mycelium and microorganisms in the soil.

"They [microorganisms] eat the bacteria, synthesise it and poop it out and it's their poop that gets absorbed by the tree roots, but the tree roots need mycelium to absorb it," she said

"Mycelium is the dry matter that we actually farm and add as an inoculant to the soil and then wait for rain to come along and that activates it."

About 100 grams of the final mix is added to each tree twice a year.

1.Collecting the culture (mouldy leaves) from the farm environment and then using that to grow more mould on a bed of rice
2.Mixing equal parts mouldy rice and brown sugar and storing in a glass jar away from sunlight
3.Using a small amount of the rice/sugar paste and mixing that with waste nut and husks of macadamias as well as a homemade liquid
4.Combining equal parts garden soil with the above mixture
5.Adding goat and chicken manure to the blend then sprinkle around trees adding organic gypsum on top

The aim of this process is to eventually regenerate the soil to a stage where it can naturally create this balance without the need to add anything to it.

Microbiologist Jeremy Bradley said Ms Rose was not alone in her move to regenerative farming.

"Here in Australia we've been moving towards re-establishing natural microbiomes," he said. "Those amazing crops that were experienced by the pioneers where they just put seed wheat and got magnificent big crops — they were because the natural microbiome was still intact."

"This not a niche market at all or a cottage industry," she said.

"A lot of these practices are becoming mainstream, like multi-species pasture cropping, no-kill cover cropping, incorporating green manures and under sowing of legumes, changing crop rotations, and having strip crops of different species."

Ms Gordon said her organisation was working to debunk myths in the space: for example, not being able to use any chemicals.

"Regenerative agriculture is not organic agriculture," she explained.

"There's a massive misconception that they [farmers] are going to go broke doing it or have to lock up country — none of those things is true."
Mr Bradly recommended that farmers wanting to get into regenerative agriculture should start very small.

"I think that a farmer could do well from learning how to use a microscope and having a really good look at their own soil," he said.